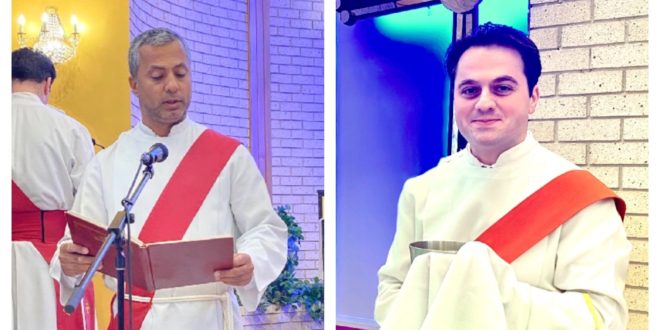 The Archdiocese of Australia, New Zealand and Lebanon is pleased to announce that on Sunday the 6th day of September 2020, His Eminence Mar Meelis Zaia AM will ordain Reverend Deacons Riyadh Dinkha and Ramen Youkhanis to the ranking of Priesthood for the Holy Church. The ordination will take place at St Hurmizd’s Cathedral at 8:00am. As we are facing the current pandemic, the ordination will be streamed live (further details to be provided closer to date).

Rev Dn Riyadh was born in Baghdad, Iraq on the 14th day of September 1979 to parents the Late Shlemon Dinkha and Ms Mariam Qashow. He migrated to New Zealand in 2000, and settled in Australia with his family in 2013. Rev Dn Riyadh spent his childhood immersed in church services in Iraq and continued to do so after taking on rank in the Holy Church. Throughout his time living in Sydney, he has served as one of the Deacons to the Cathedral with commitment and diligence to all of its services, in addition to leading adult bible studies for parishioners. Rev Dn Riyadh is a registered architect and builder. After the ordination, Dn Riyadh will be based at St Mary’s Church, Smithfield.

Rev Dn Ramen was born in Basra, Iraq on the 20th day of December 1989 to parents Dr David and Mrs Moren Youkhanis. The family migrated to Australia in 1995 and settled in Sydney. Rev Dn Ramen’s childhood was spent within the church programs and ministries. After taking on ranking in the Holy Church, he got involved with the youth and children’s ministries, ACERO Australia responsibilities and general Archdiocese commitments as the Secretary to the Archbishop. Dn Ramen registered with the Australian Counselling Association and took on the role of College Counsellor at St Narsai Assyrian Christian College since 2014. After the ordination, Dn Ramen will be based at St Hurmizd’s Cathedral, Greenfield Park.