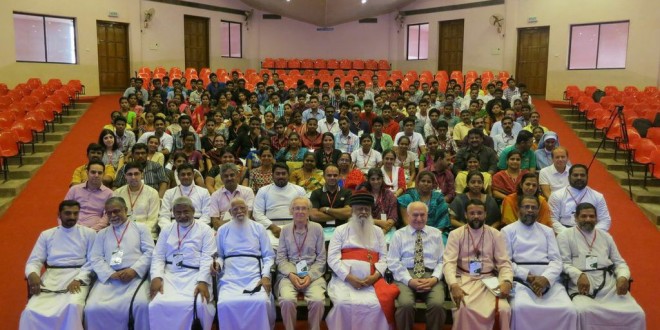 The Youth Conference of the Archdiocese of India was held in Thrissur, Kerala between 3 and 7 September 2014 under the theme ‘Life In Its Abundance (John 10:10)’. In particular, the theme was considered with respect to its multifaceted implications in the religio-political and social life.

The inaugural Youth Conference of the Church of the East in India was staged with the imprimatur of His Holiness Mar Dinkha IV, Catholicos-Patriarch of the Assyrian Church of the East and under the patronage of His Beatitude Dr Mar Aprem, Metropolitan of Malabar and India. His Grace Mar Awgin Kuriakose, Auxiliary Bishop of India gave leadership to the organising committee with the support of The Rev’d Dr Sr Jincy Otthotil.

The conference’s opening day commenced with more than 200 Indian youth participants registering. Joining the Indian delegates were 5 Assyrian participants visiting from abroad; 2 from the United Kingdom, 2 from Australia and 1 from Latvia. A large number of attendees were expected to be present but were prevented from attending owing to the ongoing crisis facing the Assyrian community in Iraq. Regrettably, a number of delegates from the United States were also unable to attend having been refused visas by the Indian government. The opening session of the conference was attended by the Metropolitan and two Bishops of India, a large number of the clergy of the Church of the East in India along with notable dignitaries. Guest of Honour at the inaugural session was Dr G. Madhavan Nair, former Chairman of the Indian Space Research Organisation who was honoured for his work in service of humanity and of the Indian nation.

The event programme was in full force from day 2 opening with the consecration of the Holy Qurbana in Syriac by His Grace Mar Awgin Kuriakose at Marth Mariam Cathedral; the Metropolitan headquarters of the Church of the East in India. Notably, the Youth Conference coincided with the 200th anniversary of Marth Mariam Cathedral which is the oldest church in the town of Thrissur. The first lecture of the conference was given by His Grace Dr Geevarghese Mar Coorilos, Moderator of the World Council of Churches Commission on World Mission and Evangelism. His Grace, a noted leader in the field of eco-theology offered profound insights into modern themes confronting the Christian faith and the relevance that the Christian churches can have in addressing prevailing social, economic and political issues of the modern age. The daily programmes were also filled with numerous biblical, spiritual and fellowship activities which positively engaged the youth and enhanced their experiences. The day’s programme was concluded with excursions to the following institutions of the Church of the East in India: Bethanya Old Age Home, Mar Aprem Church, Mar Mari Sleeha Church (Kuriachira) and the Seminary of the Church of the East in Thiroor.

Day 3 of the Youth Conference included two lectures; one given by Mrs Pearly Jos, a member of the Church of the East in India and present Vice-President of the National Council of Churches in India and His Beatitude Dr Mar Aprem, Metropolitan. Both lectures were welcomed with much enthusiasm by the attendees and spurred ongoing discussions both on the conference theme and in the case of the Metropolitan’s lecture, on the history of the Church of the East in India and abroad. The highlight of the day’s programme was the Indo-Assyrian Cultural Night featuring musical and folkloric performances performed by both the Indian and Assyrian delegates. As the conference coincided with the Kerala State Festival of Onam, a number of the performances were related to this particular celebration.

Day 4 was graced by the presence of a number of major academic and political personalities whose presentations from a number of perspectives inspired the delegates. The day’s programme commenced with a lecture by Professor Rifaat Ebied of the University of Sydney. Professor Ebied spoke on the theme of martyrdom in the Christian church with particular reference to the Assyrian and Coptic communities of the Middle East. The renowned Syriac scholar, Dr Sebastian Brock next addressed the delegates discussing the origins of his interest in Syriac studies and providing an update recent developments in the field. The afternoon programme included visits to Mar Thoma Church (Pattikadu), Mar Timotheus Memorial Orphanage (Kalathode) as well as Mar Timotheus Memorial Hospital and Santhosham Old Age Home (Kunnathumkara). The evening was closed with an impressive Valedictory Function in which His Excellency K.P. Fabian, renowned Indian diplomat was the Chief Guest.

The conference closed with the consecration of the Holy Qurbana in the Malayalam language at Mar Yohannan Mamdhana Church in East Fort.

Given the resounding success of the event and its positive impact upon the spiritual and social life of the delegates, it is the hope that such conferences can continue to be staged into the future. The Archdiocese of India and all those involved in staging the event were lauded by the delegates for having organised a stimulating programme, attracted notable guest attendees and put together an event of the highest standards.