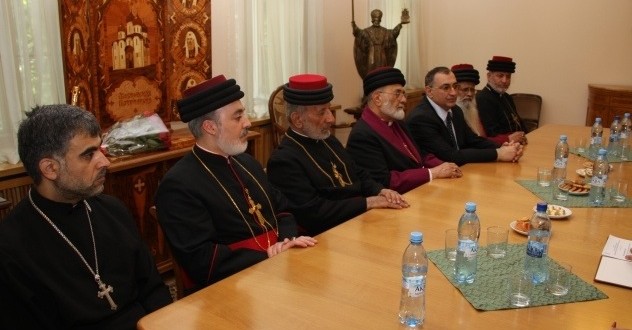 On May 27, 2014, Metropolitan Hilarion of Volokolamsk, met with the Catholicos-Patriarch of the Assyrian Church of the East, Mar Dinkha IV, who is on a visit to Russia at the invitation of His Holiness Patriarch Kirill of Moscow and All Russia.

During a warm talk, His Eminence Hilarion told the high guest about the recent celebrations marking the 1025th anniversary of the Baptism of Rus’ and the changes which have taken place in the Russian Orthodox Church since the previous millennial celebrations which Patriarch Mar Dinkha IV attended. The Primate of the Assyrian Church expressed deep satisfaction at the successes of church renewal in the historical Rus’, noting that Russia and the Russian Orthodox Church constitute a spiritual and moral guideline for many traditional Christian communities in the world. He wished the Russian Orthodox Church further thriving in its service of its millions-strong flock. Special attention was given to the situation of Christians in the Middle East.

His Holiness Mar Dinkha IV expressed heartfelt gratitude to Russia and personally President Vladimir Putin for his efforts to help Christians in the Middle East. He said that the stand taken by Russia was decisive in preventing the bombing of Syria and remains a key-position in defending Christians in the Middle East, which befits the historical role of the Russian State.

His Holiness also recalled the genocide of Christian peoples in the Ottoman Empire in 1914-1918 and the losses suffered by the Assyrian people at that time. Those events became a pretext for the mass resettlement of the Assyrians to the Russian Empire, the centennial of which is marked this year.

The Assyrian Patriarch also spoke about the irreparable damage inflicted on Christians in the Middle East today as a result of the destabilization of the political situation in the region and engagement of radical Islamist forces in politics. Thus, in recent years in Iraq, a great number of Christian churches have been destroyed and thousands of Christians were killed for their faith in Christ.

Metropolitan Hilarion expressed profound compassion on the Assyrian Church of the East for the losses it has suffered in recent years in Iraq and Syria and assured his guest that Russia and the Russian Orthodox Church will continue giving all possible support to Christians suffering in the East.

The need was pointed out for the Russian and Assyrian Churches to be more active in informing the international public of the scale on which Christians in the Middle East are subjected to continued persecution and to join efforts in this task.

They also discussed prospects for further interaction between the two Churches, including in developing development of joint academic and theological projects and students’ exchange.

In conclusion Metropolitan Hilarion presented the high guest with tokens of the meeting, among which was the Russian version of his book on St. Isaac the Syrian, a fruit of His eminence’s study of the spiritual legacy of this great saint venerated both in the Orthodox and the Assyrian Churches. 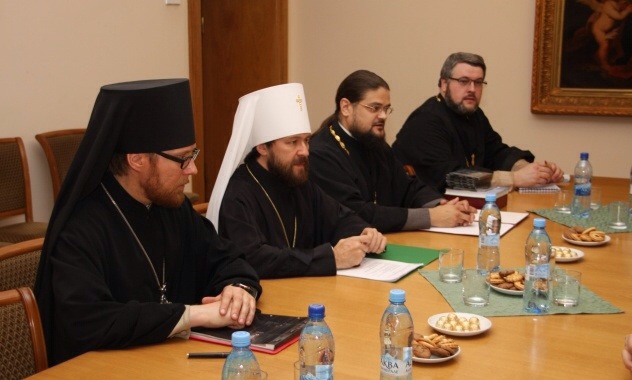 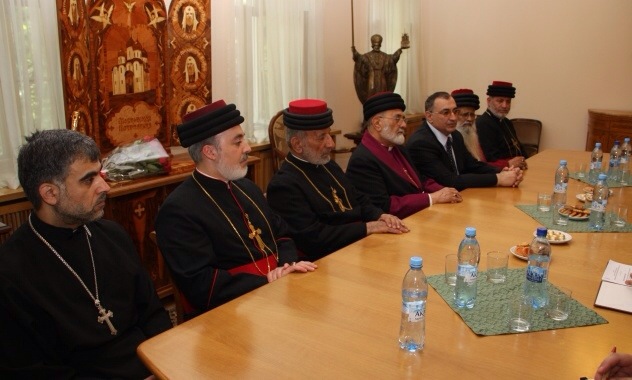 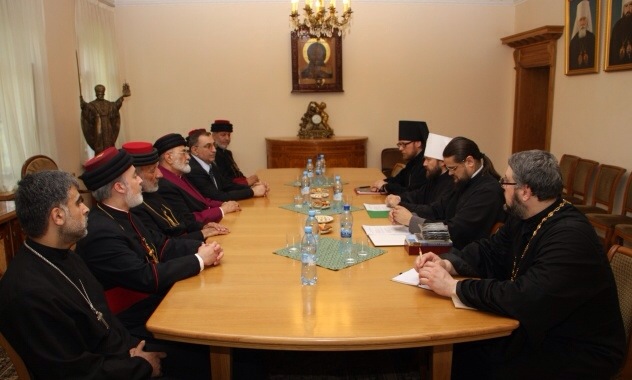 Previous Voice of the East – Vol. 61 – May & June 2014
Next New Church Consecrated in Auckland, New Zealand