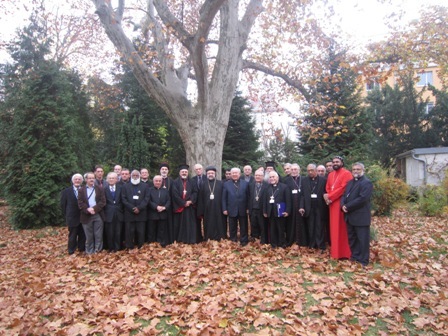 His Grace Mar Awa Royel, Bishop of California and Secretary of the Holy Synod has represented the Assyrian Church of the East at the Third Colloquium Syriacum, an international conference for scholars of the Syriac tradition.

His Grace (standing member of the Forum Syriacum) was accompanied by the Rev. Fr. William Toma, parish priest of Mar Sargis Parish, Chicago.

Organised by the Pro Oriente Foundation, this year’s Colloquium was convened in Vienna, Austria from 9-11 November under the theme: Middle Eastern Christians Facing New Challenges.

The Colloquium was comprised of papers and presentations by both prelates and scholars reflecting on the Special Synod for the Middle East 2010, held at the Vatican in early October of 2010. Representing the Assyrian Church of the East at this synod was His Beatitude Mar Gewargis Sliwa, Metropolitan of all Iraq, who attended as a delegate of His Holiness Mar Dinkha IV, Catholicos Patriarch.

Among the papers presented, other important themes taken up were the ramifications of the Special Synod of October 2010, Christian-Muslim Implications of the same synod, as well as Christian-Jewish Implications. A very important theme taken up in this year’s Colloquium was the ecumenical (Christian-Christian) dimension of the synod and of the on-going plight of the Christians of the Middle East, among them the Assyrian Christians.

The past three Colloquia have been concentrating on the worsening condition of the Christians of the Middle East. For the future, Pro Oriente would like to further promote the ecumenical efforts among the Syriac-speaking Church in the upcoming Colloquium.