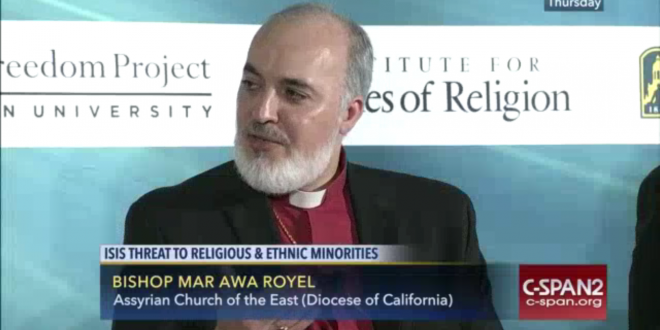 At the invitation of the Berkley Center for Religion, Peace and World Affairs, and with the express blessing of His Holiness Mar Gewargis III, Catholicos-Patriarch of the Assyrian Church of the East, a delegation of the Assyrian Church attended the Conference: “Threats to Religious and Ethnic Minorities under the Islamic State,” on July 28, 2016. The conference was co-sponsored by the US Department of State’s Office of International Religious Freedom and the Georgetown University in Washington. The following day, a closed-session meeting took place at the State Department, with many diplomats and parliament representatives present from numerous countries.

The Assyrian delegation, consisting of His Grace Mar Awa Royel, Bishop of California and Secretary of the Holy Synod, along with the Very Rev. Archdeacon William Toma of the Diocese of Eastern USA, took part in the public session of the conference held under the auspices of the Berkley Center’s ‘Religious Freedom Project.’ The conference was attended by representatives of the various religious and ethnic minority entities in Iraq and Syria. The US Ambassador-at-Large for Religious Freedom, David Saperstein, addressed all those in attendance. Also addressing the body was Knox Thames, the Special Advisor for Religious Minorities in the Near East and South and Central Asia, attached to the same US State Department’s Office of International Religious Freedom.

During the first panel of the public session of the Conference, His Grace Bishop Mar Awa was invited to speak on the first panel which dealt with the perspectives of religious and ethnic leaders, most of whom were from Iraq. During this first panel discussion, the panel members discussed the current status of religious and ethnic minorities in Iraq and Syria victimized by ISIS. Threats that are posed to these groups are of both a humanitarian and security nature. The daily challenges of these communities were also discussed. Further, the impact of the recent declaration of the atrocities of ISIS against the Assyrian/Christian and other non-Christian communities as an act of ‘genocide’ by the US Secretary of State was also discussed by the panel.

The video of the first panel discussion may be seen on-line at: https://www.c-span.org/video/?413291-1/georgetown-university-hosts-discussion-religious-freedom-isis