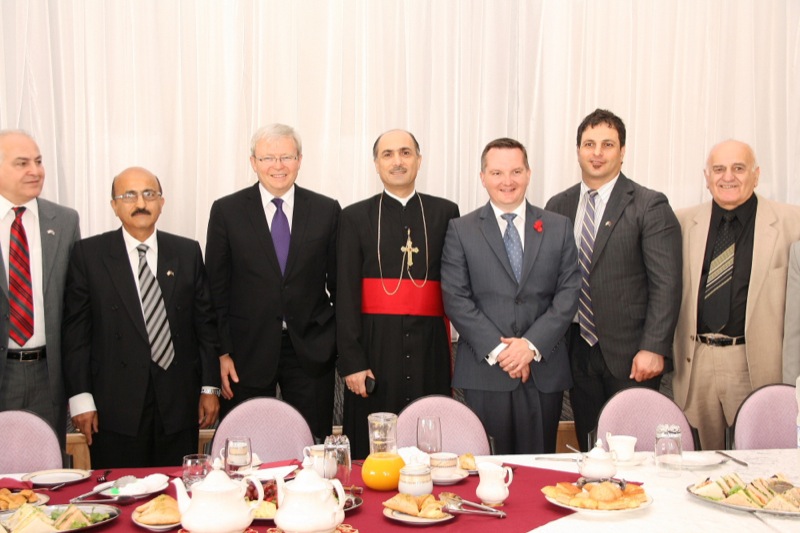 Former Australian Prime Minister and current Minister for Foreign Affairs, the Hon. Kevin Rudd MP has met with His Beatitude Mar Meelis Zaia AM, Metropolitan of Australia, New Zealand and Lebanon in Sydney.

Accompanying the Foreign Minister was the Hon. Chris Bowen MP, Minister for Immigration and Citizenship and Member representing the Federal Electorate of McMahon.

The program commenced with the welcoming of the official party, followed by the keynote speech given by His Beatitude addressing the current status of the church, the Assyrian Schools, and the condition of internally displaced Assyrian refugees in Iraq and in neighbouring countries.

The Metropolitan went on to note his pride in the ability of Iraq’s Assyrian Christians to remain faithful and active in their homeland despite the unstable circumstances, referring in particular to political organisations who have been working diligently towards greater rights for the Assyrian Christian minority in Iraq. The efforts of these groups towards the establishment of the Nineveh Plains Province in Northern Iraq are welcome signs of the region becoming a safe-haven for Iraq’s Christians and other minorities in the future, said His Beatitude.

Those present had the opportunity to engage in a dialogue with the visiting Cabinet ministers, raising their concerns with regard to the plight of the Assyrian people in Iraq. Questioners also noted the upcoming 60th anniversary of the establishment of the office of United Nations High Commissioner for Refugees (UNHCR) in Geneva (to be celebrated on 14 December) and forthcoming meetings between Australian and Iraqi officials regarding migration issues.

Mr. Bowen spoke concerning the current position of Australia’s Department of Immigration and Citizenship, stressing the importance given to Assyrian Christians within Australia’s humanitarian program and opportunities for the granting of visas within the latter program.

Following the official program, the visiting Ministers moved onto a tour of St. Hurmizd Assyrian Primary School (SHAPS) where they were welcomed warmly by school staff and students.

Foreign Minister Rudd was briefed on recent Commonwealth funding contributed towards the expansion and building of the new school library and assembly hall, which came to a total of $3 million dollars in support of high-quality educational facilities to meet Australian school standards. His Beatitude commended the Australian government for the support provided to the Assyrian Schools both in the past and currently.

The visit to SHAPS was followed by a tour of St. Hurmizd Cathedral where His Beatitude gave an overview of the history, doctrine and theology of the Assyrian Church of the East.

Mr. Rudd expressed his happiness and gratitude in spending such a beautiful day with the clergyman and faithful of the Assyrian Church of the East in the Metropolitan See of Sydney. The Foreign Minister noted his particular interest in the historic missionary work of the Church of the East, whose missionaries were the first in Christendom to take the Christian faith as far as China, Japan and Tibet from the 8th century.

At the conclusion of the historic visit, His Beatitude expressed his gratitude to Mr. Rudd and Mr. Bowen for the time and effort invested by them in visiting with the Assyrian Church of the East in Sydney. The Metropolitan beseeched Almighty God to grant good health, wisdom and blessings to the visitors as they continue to work for the benefit of the Commonwealth of Australia and its people.