Home > Education > Commentary on the Second Sunday of the Resurrection

Commentary on the Second Sunday of the Resurrection

The Second Sunday of the Resurrection

“On Sunday the New day. Come let us sing the new glory. Unto the Christ the new groom. For He has promised us the new world.”  (Khoodra Prayer Book, Volume II, Page 601)

We learn from the Holy Bible that:

“1 Early on the first day of the week, while it was still dark, Mary Magdalene went to the tomb and saw that the stone had been removed from the entrance. 2 So she came running to Simon Peter and the other disciple, the one Jesus loved, and said, “They have taken the Lord out of the tomb, and we don’t know where they have put him!” 16 Jesus said to her, “Mary.” She turned toward him and cried out in Aramaic, “Rabboni!” (Which means “Teacher”)?  17 Jesus said, “Do not hold on to me, for I have not yet ascended to the Father. Go instead to my brothers and tell them, ‘I am ascending to my Father and your Father, to my God and your God.’” (John 20:1-19)

“13 Now behold, two of them were traveling that same day to a village called Emmaus, which was seven miles from Jerusalem.  14 And they talked together of all these things which had happened.  15 So it was, while they conversed and reasoned that Jesus Himself drew near and went with them.  16 But their eyes were restrained, so that they did not know Him.” (Luke 24:13-16)

“17 And He said to them, “What kind of conversation is this that you have with one another as you walk and are sad?”18 Then the one whose name was Cleopas answered and said to Him, “Are You the only stranger in Jerusalem, and have You not known the things which happened there in these days?”19 And He said to them, “What things?” So they spoke to Him about Jesus’ suffering and death on the Cross…… 25 Then He said to them, “O foolish ones, and slow of heart to believe in all that the prophets have spoken!  26 Ought not the Christ to have suffered these things and to enter into His glory?”  27 And beginning at Moses and all the Prophets, He expounded to them in all the Scriptures the things concerning Himself.”  (Luke 24:17-27)

Our Lord Jesus Christ celebrate two Masses both in the evening. One before His Crucifixion immediately after He ate the last supper with His disciples according to (Matthew 26:26). The second after His Resurrection with two of His disciples in the village of Emmaus. So rule of celebrating the Eucharist in the evening was indeed established by the Lord Himself.   He Himself said whenever two are gathered in my name I am there among them. It is written:

“When he was at the table with them, he took bread, gave thanks, broke it and began to give it to them. 31 Then their eyes were opened and they recognized him, and he disappeared from their sight. 32 They asked each other, “Were not our hearts burning within us while he talked with us on the road and opened the Scriptures to us?” (Luke 24:30)

“On the evening of that first day of the week, when the disciples were together, with the doors locked for fear of the Jewish leaders, Jesus came and stood among them and said, “Peace be with you!” 20 After he said this, he showed them his hands and side. The disciples were overjoyed when they saw the Lord”. (John 20:19-20)

“Now Thomas (also known as Didymus), one of the Twelve, was not with the disciples when Jesus came. 25 So the other disciples told him, “We have seen the Lord!”  But he said to them, “Unless I see the nail marks in his hands and put my finger where the nails were, and put my hand into his side, I will not believe.”  26 A week later his disciples were in the house again, and Thomas was with them. Though the doors were locked, Jesus came and stood among them and said, “Peace be with you!” 27 Then he said to Thomas, “Put your finger here; see my hands. Reach out your hand and put it into my side. Stop doubting and believe.” 28 Thomas said to him, “My Lord and my God!”  29 Then Jesus told him, “Because you have seen me, you have believed; blessed are those who have not seen and yet have believed.” (John 20:24-29)

We should believe that in the midst of fear and hopelessness the Lord will not leave us alone. He will be present among us and He will take away our fear and haplessness by giving us peace of His Resurrection.

“Again I say to you, that if two of you agree on earth about anything that they may ask, it shall be done for them by My Father who is in heaven. 20 “For where two or three have gathered together in My name, I am there in their midst.” (Matthew 18:19-20)

Again it is written:

“So let no one judge you in food or in drink, or regarding a festival or a new moon or Sabbaths, which are a shadow of things to come, but the substance is of Christ.” (Colossians 2:16-17)

Previous An Introduction to the Divine Revelation
Next His grace bishop Mar Awa Royel receives the Assyrian national council of Stanislaus. 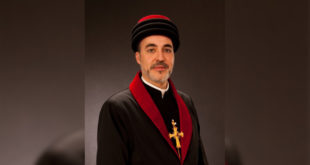 The Pearl of Great Price: The Anaphora of the Apostles Mar Addai & Mar Mari as an Ecclesial and Cultural Identifier of the Assyrian Church of the East.

It gives me great joy to be present today and address this assembly in conjunction with the opening of the academic year of the Orientale, my own alma mater, particularly with the presence of His Beatitude Mar Louis Raphaël I Sako, Patriarch of Babylon for the Chaldean Catholics.