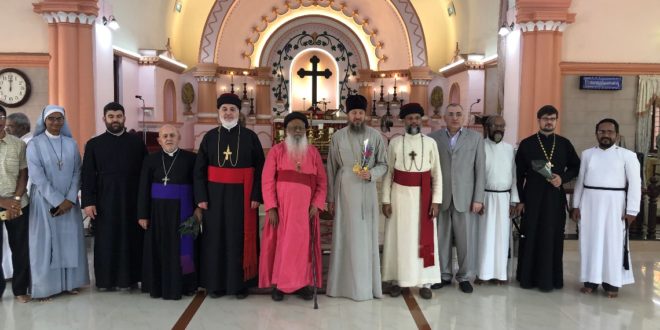 The fourth meeting of the official Bi-Lateral Commission for Dialogue between the Assyrian Church of the East and the Russian Orthodox Church met in Thrissur, Kerala from 13 to 16 November, 2019. The meetings were held under the auspices of the Archdiocese of India in Thrissur, hosted by His Beatitude Mar Aprem, Metropolitan of India for the Assyrian Church of the East.

​On the Commission’s first full working day held on Wednesday, November 13th, the Commission was formally welcomed by His Beatitude Metropolitan Mar Aprem, the head of the Archdiocese of India. Then, the Commission reviewed the pastthree bi-lateral meetings and the results of these past three sessions of dialogue. The following areas of collaboration between the two Churches were further discussed, with recommendations to the respective authorities of both Churches: 1) continued academic collaboration in the form of sending students to the theological institutions of each Church; 2) continued collaboration in the form of international and local conferences highlighting the theological patrimony and identity of each Church; 3) putting into effectcoordinated efforts of a humanitarian nature in regards to the situation of the Christians of the Middle East; 4) a unified voice confronting issues of Christian morality and the challenges to moral norms of the Church; 4) discussions about shared participation in Church youth conferences, particularly on a global and regional level; 6) the prospects of setting up a formal consultation which will be tasked with identifying the theological issues which both Churches share in common, and which are unique to each Church.

​On the Commission’s second full working day, the participants were given the chance to visit the various institutions of the Assyrian Church of the East, Archdiocese of India, accompanied by His Grace Bishop Mar Awgin Kuriakose. In the morning, the members of the Commission were formally received at the Marth Maryam Cathedral in Thrissur. They were given an overview of the complex, which houses the main church for the archdiocese, an archdiocesan museum (opened in 2018), the burial chapel of the hierarchs of the Church of the East in India, and particularly a visit and prayer at the tomb of the newly canonized saint of the Church of the East, Mar Abimalek Timotheus, who served as metropolitan of the Indian Church from 1908 to 1945. St. Mar Timotheus was canonized by His Holiness Mar Gewargis III, Sliwa, Catholicos-Patriarch, at a formal function held by the Church of the East in Thrissur, on September 29, 2019. The vicar of the cathedral parish, Rev. Fr. Binu Joseph, received a generous donation in the amount of $10,000 from ACERO-USA (Assyrian Church of the East Relief Organization) towards a project which will provide homes for ten poor families. This complex will be built on land purchased by the Church of the East in India, and by donations from the Church as well as generous donors and benefactors.

​Then, the participants visited the second main church, dedicated to St. John the Baptist in East Fort. This church was founded in 1910 by St. Mar Timotheus, and has been recently renovated and enlarged. The members of the Commission were given a formal reception at the ‘Chaldean Syrian Higher Secondary School,’ one of the major institutions of learning of the archdiocese, which serves over 1,000 students and is known in the State of Kerala for its academic achievements. The Commission was then formally received by the staff and clerical students of the Seminary of the Church of the East in Thiroor, which was founded in 1956 on a 52-acre cashew plantation, donated at the time by Athleeta Inassu. The seminary is a large complex and at present there are five full-time students (three deacons and two brothers) who live and study at the seminary, as well as in secular institutions in order to obtain their bachelor’s degree. The seminary was recently renovated, to include a chapel of the Cross and an extensive animal farm and rubber tree plantation. The Commission members were received for lunch at the seminary and accorded a very warm hospitality.

​Afterwards, the Commission was given a tour of the ‘Mar Timotheus Charitable Hospital,’ which was inaugurated by the late Catholicos-Patriarch Mar Dinkha IV in 1990. This charitable hospital serves the poor and needy of the township, and it is noteworthy that the doctors who are members of the Church of the East in India volunteer their time to serve at the hospital. The administration of the hospital noted its heartfelt thanks to ACERO-USA for its extensive financial support of the hospital’s needs and projects, including the purchase of three much-needed dialysis machines, dental-surgical equipment, among other projects. The members of the Commission were then taken to visit the ‘Dr. Sandosham Memorial Old Folks Home,’ behind the hospital. This institution houses thirty elderly residents, which included members and non-members of the Church of the East. Finally, the Commission paid an extensive visit to the ‘Mar Timotheus Memorial Orphanage’ in Kalathode. This orphanage is one of two orphanages operated by the Church in India, and is a co-ed institution serving some 60 children. After a warm reception by the orphanage administration and staff, the Commission members interacted with the children, who sang two devotional songs for their guests. Then, His Grace Bishop Kliment addressed the group and informed them of the reason for their visit. It is noteworthy, that the children of the orphanage are a mix of Christians and non-Christians, and it was founded by the late mother if His Beatitude Mar Aprem metropolitan in 1961, in memory of the metropolitan Mar Abimalek Timotheus.

​In conclusion of their working days, the Commission thanked His Beatitude Mar Aprem, Bishop Mar Awgin and the rest of the clergy and staff of the various institutions of the archdiocese for a memorable visit and for their warm hospitality. The Russian members of the Commission were particularly impressed with the Church’s many social and educational activities in and around Thrissur, without distinction of religion. The Commission fixed the meeting of the upcoming fifth Bi-Lateral Dialogue Commission meeting to take place in the Diocese His Grace Bishop Kliment of Krasnoslobodsk (Russian Federation), in September 2020.

​The official communique issued by the Commission is herewith attached. 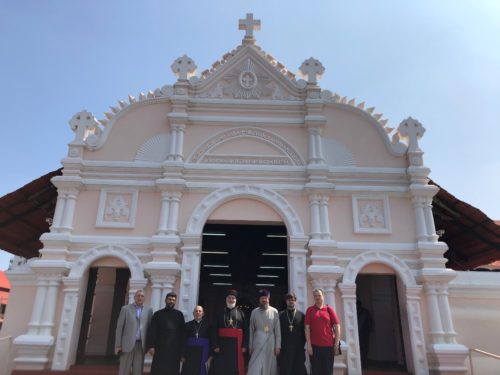 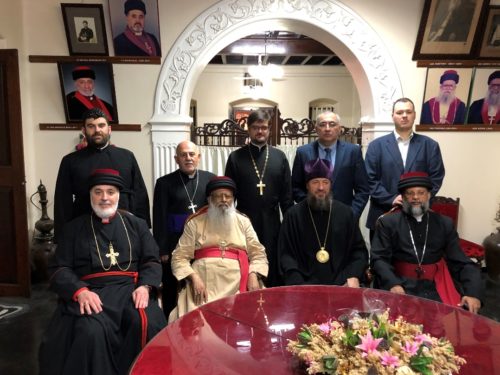 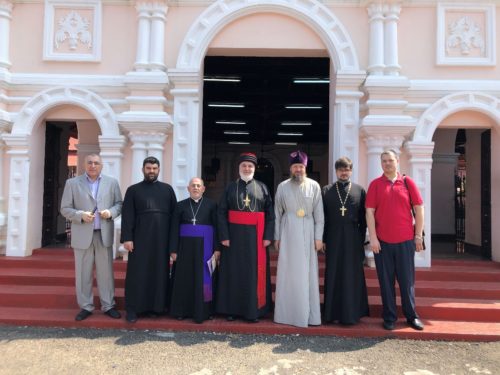 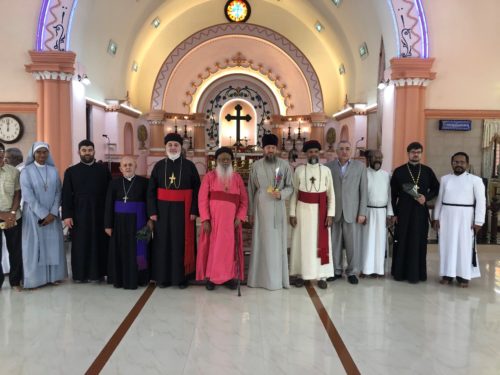 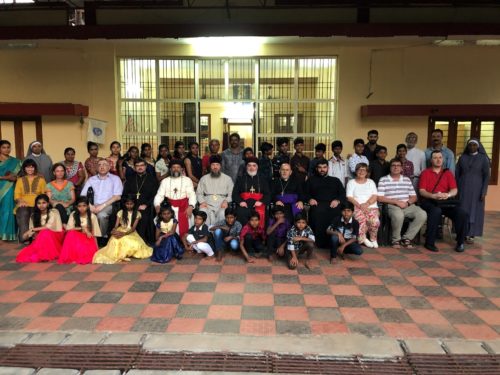 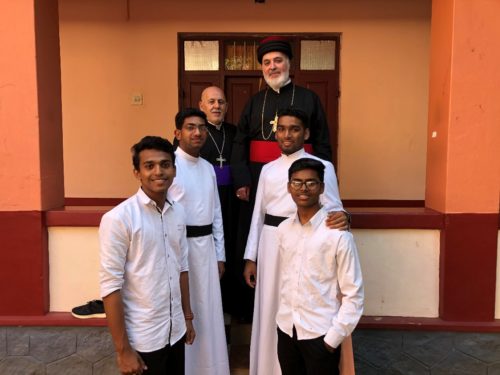 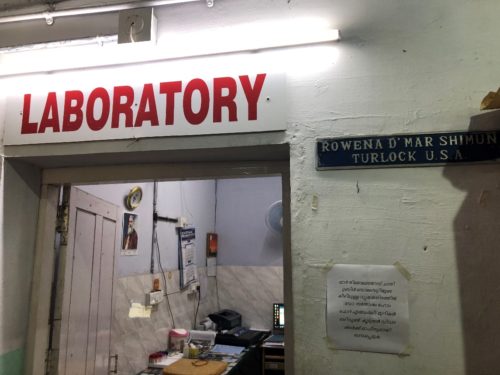 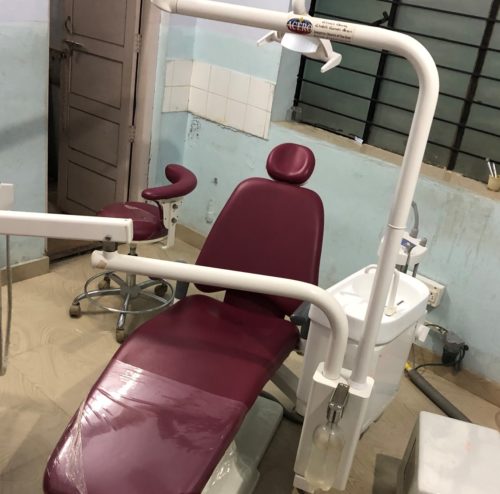