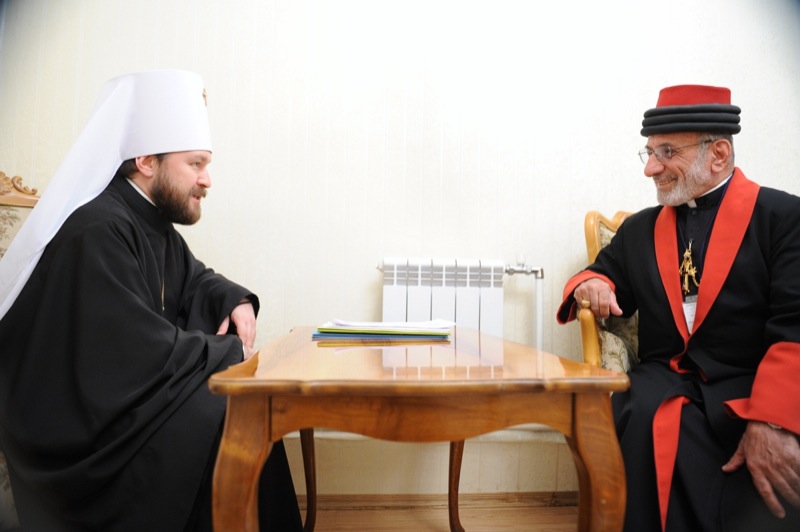 His Beatitude Mar Gewargis Sliwa, Metropolitan of Baghdad and Iraq, has met Metropolitan Hilarion of Volokolamsk, chairman of the Moscow Patriarchate’s Department for External Church Relations, while on a sojourn to the Russian capital.

His Beatitude Mar Gewargis travelled to Moscow to take part in the Conference on the Freedom of Faith: the Problem of Discrimination and Persecution of Christians.

During the meeting, on 30 November, the hierarch of the Assyrian Church of the East thanked the Russian Orthodox Church for her attention to the needs of the Christian community in Iraq.

“Many Christians, who lived in Iraq for centuries, have left the country in recent years. These are the followers of the Assyrian Church of the East and of other Christian communities,” said a statement from the Russian Orthodox Church Department for External Church Relations (DECR).

On behalf of the Russian Orthodox Church, the DECR chairman expressed solidarity with the persecuted Christians in Iraq. He informed His Beatitude Mar Gewargis of the recent statement on the growing manifestations of Christianophobia in the world made by the Holy Synod of the Russian Orthodox Church. He also told him about the efforts the Moscow Patriarchate makes to draw the attention of politicians and the public to this problem.

AssyrianChurchNews: A video report detailing His Beatitude Mar Gewargis Sliwa’s recent sojourn to Russia can be viewed courtesy of ATRANEWS at: