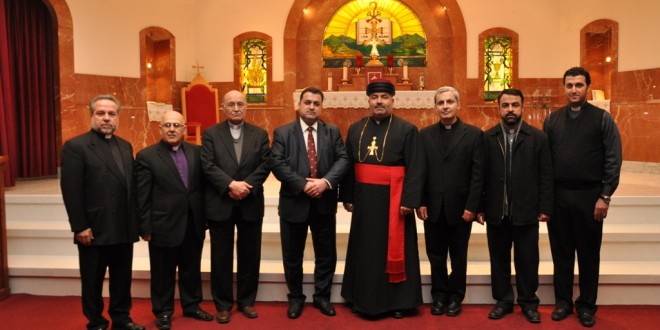 Share
On Thursday, March 14, 2013, His Grace Mar Paulus Benjamin, the bishop of Chicago and the Diocese of the Eastern USA, accompanied by the priests of diocese in the state of Illinois, received Mr. Johnson Siyawesh, the Minister of Transportation and Communication in the Kurdistan Regional Government, at St. Andrew’s Church in Glenview.
In this meeting, Minister Siyawesh explained the purpose of his visit to the United States and portrayed the situation of our people in Iraq, especially in the Baghdad and Nineveh regions.
His Grace praised the exertion of Minister Siyawesh and all our political leaders in serving the cause of our people and promised to keep them always in his prayers. His Grace also stated that as a bishop and a church leader he will always support with words and action all the constructive attempts aimed to restore the rights of our people in our homeland to live in freedom and dignity.
After the meeting, His Grace Mar Paulus welcomed the Minister to partake in a lunch prepared by the Ladies Auxiliary of St. Andrew’s Church.
At the end of this meeting His Grace Mar Paulus Benjamin wished Minister Siyawesh success in his mission of serving our people and their honorable cause, and the visiting Minister in turn thanked His Grace for the cordial meeting and hospitality.
[nggallery id=413]