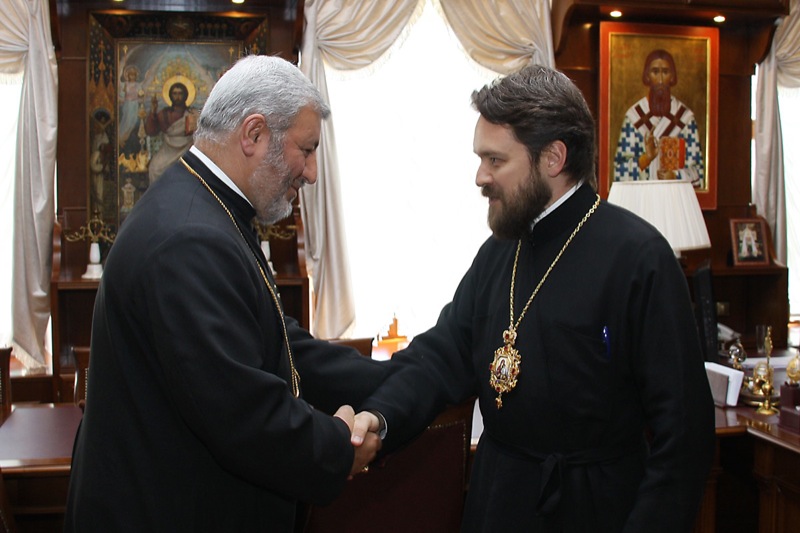 On May 11, 2011, Metropolitan Hilarion of Volokolamsk, head of the Moscow Patriarchate’s department for external church relations, received Bishop Mar Isaac Joseph of Northern Iraq and Russia, Assyrian Church of the East, at his request.

Bishop Mar Isaac Joseph thanked Metropolitan Hilarion for the audience and talk and told him about the hardships experienced by Christian Churches in Iraq today, about the blasting of churches and attacks on Christians. He asked the Supreme Authorities of the Russian Orthodox Church to raise their voice in defence of the suffering Christian population in Iraq and a number of other countries so that the world community could pay attention to these facts and put an end to the continued violence committed on religious grounds.

During their talk, Metropolitan Hilarion assured Bishop Mar Isaac Joseph of the support of the Russian Orthodox Church and said that the Moscow Patriarchate considered it extremely important that the world community and international organizations should give special attention protecting the life, dignity and religious freedom of Christians in a number of countries in Asia, Africa and the Middle East.

In conclusion, Bishop Mar Isaac Joseph asked Metropolitan Hilarion to convey to Patriarch Kirill of Moscow and All Russian cordial greetings and best wishes from the Primate of the Assyrian Church of the East, Catholicos Mar Dinkha IV.

Present at the meeting were also Rev. Dimitry Sizonenko, DECR acting secretary for inter-Christian relations, Rev. Alexander Vasyutin of the secretariat, and Rev. Samano Odisho, rector of the Assyrian church of St. Mary in Moscow.