The holy Council of Prelates of the Assyrian Church of the East, presided by His Beatitude Mar Aprem, Metropolitan of All India and Locum Tenens of the Patriarchal See of Seleucia-Ctesiphon, was officially called into session at the episcopal residence in Dohuk, Iraq on Wednesday, June 3, 2015. All the metropolitans and bishops were present for this council for the first full day of the ongoing extraordinary session of the Council.​

​The other work of the extraordinary Council of Prelates is concerned with the matter of our present dialogue with the Ancient Church of the East. The Council of Bishops met in a special assembly on June 1, 2015 in Arbel, Iraq, in order to respond to the requests of their bishops. As of the release of this statement, the Council of Prelates awaits the decision of the prelates of the Ancient Church in regards to the formal response of June 1, 2015 given to their recommendations. We hope that their response to our proposals for the unity and re-unification of our holy Church in a timely fashion.

​The Council of Prelates expresses its pastoral gratitude to all the faithful of the Assyrian Church of the East for their continued support in prayer and fasting for the prelates, as their shepherds and fathers in Christ, as we gather to elect the new Chief Shepherd and Father of Fathers for our holy Church. May the Lord bless you all in the name of the Holy Trinity: Father, Son, and Holy Spirit. One Living God. Amen.

Given at the episcopal residence in Dohuk, Iraq, this 3rd day of June, 2015.

By Grace: Bishop of California

and Secretary of the Holy Synod. 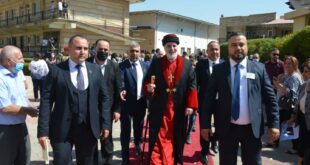