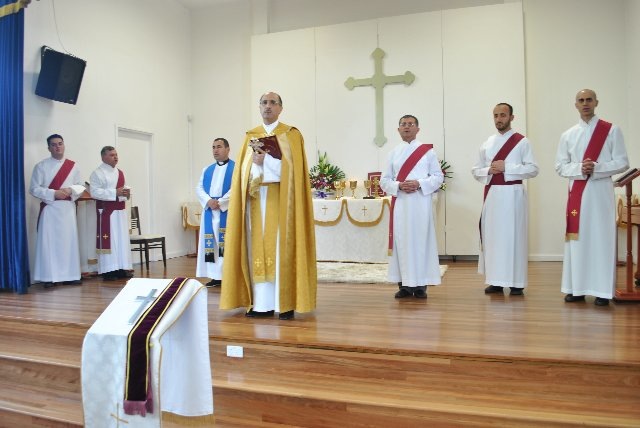 St. George Parish in Matraville, Sydney has celebrated the commemoration of their patron saint, St. George the Martyr.

The celebrations, on 6 November, commenced with the offering of the Holy Eucharist by His Beatitude Mar Meelis Zaia, Metropolitan of Australia, New Zealand and Lebanon, accompanied by Rev. Younan David, parish priest.

A large congregation of parishioners from all over Sydney attended the commemoration, including faithful from St. Hurmizd Cathedral, St. Mary Church and Ss. Peter and Paul Parish.

In a compelling sermon, His Beatitude recounted the torment and suffering of St. George the Martyr, and highlighted the significance of denying one’s self for the sake of Christ our Lord.

His Beatitude further went on to discuss the meaning of holiness (qadishootah) and greatness (gabarootah), noting that he was disappointed to hear that many people today lessen the respect of these two titles by placing it, haphazardly, on individuals. In fact, the title of sainthood is not commonly bestowed on a living individual.

St. George and other saints truly deserve their titles as evidenced by their lives, actions and commitment, said His Beatitude, and no saint should not be dishonoured.

His Beatitude warned the faithful against using such descriptive words in their dialogue with others, and encouraged them to restore the reverence which should go alongside these titles.

At the completion of the Holy Eucharist, the faithful gathered in the courtyard where a feast was prepared for the clergyman and parishioners along with music, entertainment and a raffle.