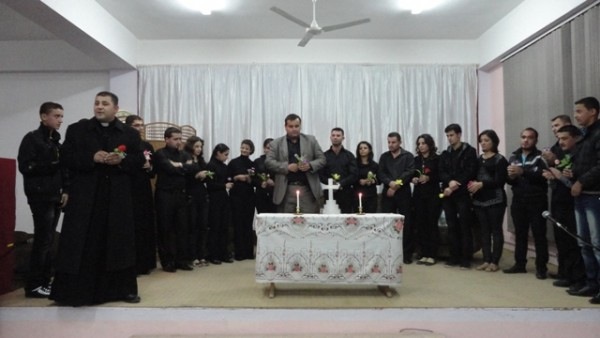 The Assyrian Church of the East in Telkaif, Northern Iraq has held a commemoration in honor of the 58 innocent Christians who were massacred at Baghdad’s Our Lady of Salvation Syriac Catholic Church on 31 October, 2010.

As part of the program, St. Shmoni Parish and the Youth Association of Telkaif staged a drama entitled Holy Eucharist Completed in the Heavens, exploring the horrific tragedy and honoring the memory of the innocent victims.

This ceremony was held at the church hall and was attended by parish priest, Chor-Bishop Yousip Beniamin along with representatives of political parties, school teachers, staff of government departments, head of the Youth Association and other guests and faithful.

The October 2010 massacre at Our Lady of Salvation Syriac Catholic Church has come to be a symbol of the ongoing slow genocide of the Assyrian people in Iraq since 2003.

Following the massacre, tens of thousands of Assyrians and other Christians took to the streets around the globe in protest of the persecution, oppression and targeting of Christians in the Middle East.

This persecution has seen the bombing of dozens of churches, the murder of more than 1000 Christians and the mass exodus of the Assyrian people from Iraq in a humanitarian crisis of immense proportions.

Previous Holy Synod Secretary Meets with US Congresswoman
Next Damascus Parish Commemorates the Feast of St. George the Martyr