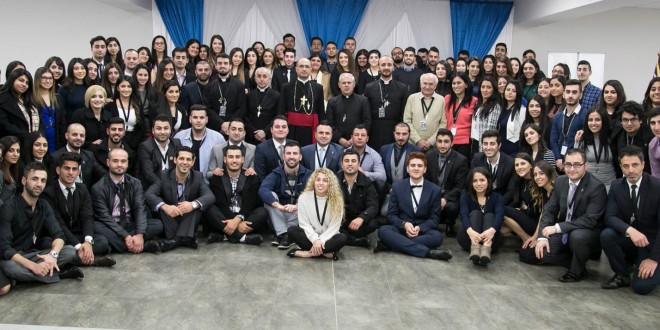 The second day of the conference comprised of seminars at the Auckland University of Technology (AUT) where Rev’d Mark Beale of the Anglican Church spoke about Serving God in Body and Spirit, Rev’d Fr Narsai Youkhanis spoke about Women and their Role in the Service of the Church, Rev’d Fr Ninos Elya spoke about The Service of the Priesthood and Rev’d Fr Antwan Mikhail spoke on the Characters of the Bible Whom Served. Preceding the seminars at AUT, the youth rested and met for dinner at Denny’s Diner in Auckland City where they shared a meal American style.

The third day of the conference comprised of three lectures held at St Mary’s Assyrian Church. Ms Nineveh Yakou spoke on the Ancient Assyrians and their service to the One God, Rev’d Fr Toma Kanon spoke about how a family unit serves God in the 21stcentury and Prof Rifat Ebied spoke about the service our Syriac gift can have for our faith and Church. At the conclusion of the third day, the youth met for dinner at La Porchetta Restaurant in Auckland City Italian style. The youth decided to act on the theme of the conference, #ServeHim and took to the streets of Auckland City to feed the homeless people.

The fourth day was set aside for sightseeing and fellowship. The entire congregation (clergymen and youth members) took a boat to Rangitoto Island and hiked up to the top for lunch and an inspirational Biblical Reflection offered by Deacon Morris Dawood (Melbourne). Dcn Morris read from a verse in proverbs that allowed the youth to comprehend how His creation serve Him. After arriving back to the shore of Auckland, the youth rested well and prepared themselves for a fine dining experience at the Sky Tower’s Orbit 360 Revolving Restaurant.

The dining experience was sensational as it gave the youth the opportunity to be dazzled by Auckland’s beauty by a sky view. The observational deck preceded the dinner whereby the youth overlooked the city and photos were taken in remembrance of such an experience with the Archbishop.

The final day comprised of the offering of the Holy Eucharist in St Mary’s Church by His Beatitude Mar Meelis. The Church was filled with young faces that motivated the local parishioners and made them feel young again. In His Beatitude’s sermon, he urged Auckland’s parishioners to support their youth and allow them to get involved in such events that draws our youth closer at a national and international level.

The closing ceremony took place after the Holy Eucharist once again in Mar Narsai DeBaz Hall whereby talks of thanksgiving and farewell speeches offered by Rev’d Fr Toma Kanon, Rev’d Fr Narsai Youkhanis, Prof Rifat Ebeid and His Beatitude. His Beatitude gave a strong talk to the youth in facing this world we live in and its challenges. He spoke about the different gifts the youth have and how it all comes together to give a beautiful holistic picture of our Church that is ‘vibrant and strong’ as stated by Prof Rifat in his thanksgiving speech.

To end the conference, His Beatitude Mar Meelis Zaia announced the location of the next youth conference to be held in Beirut, Lebanon along with a short trip to Erbil, Iraq as it will be the Patriarchal Diocese of the Assyrian Church of the East as of September this year.

Upon the conclusion of the speeches and performances, the youth were handed medallions and greeted personally by His Beatitude. The youth farewelled one another in the hope of meeting once again for another great youth conference in Beirut.

Previous HIERARCHICAL STATEMENT OF THE DIOCESAN BISHOPS OF THE DIOCESES OF THE ASSYRIAN CHURCH OF THE EAST IN THE UNITED STATES
Next Authenticity in Unity: A Personal Reflection on Present-Day Questions Concerning the Unity of the Church of the East