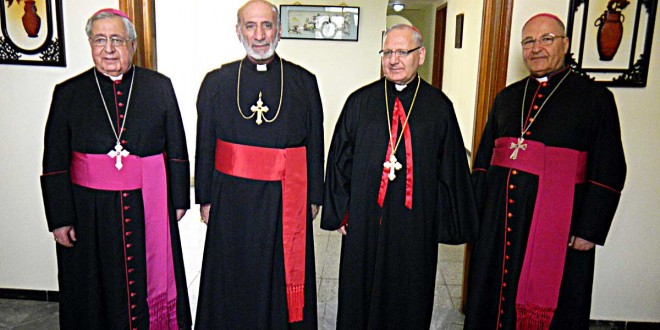 His Beatitude Mar Gewargis Sliwa, Metropolitan of Iraq and Russia, has welcomed His Beatitude Mar Louis Raphael I Sako, newly-consecrated Patriarch of the Chaldean Catholic Church to the Baghdad Archbishopric on Sunday 17 March 2013.

His Beatitude Patriarch Sako was accompanied by Bishop Jacques Ishaq and Bishop Shlemon Warduni along with the media communications representative of the Chaldean Patriarch, Father Albert Hisham.

During the fraternal meeting, the Patriarch and Metropolitan discussed the warm relations between the Chaldean Catholic Church and the Assyrian Church of the East as well as the condition of Christians in Iraq more broadly.

At the conclusion of the meeting His Beatitude Mar Gewargis Sliwa presented His Beatitude Patriarch Sako with a new pectoral cross as a symbol of fraternal affection between brothers.