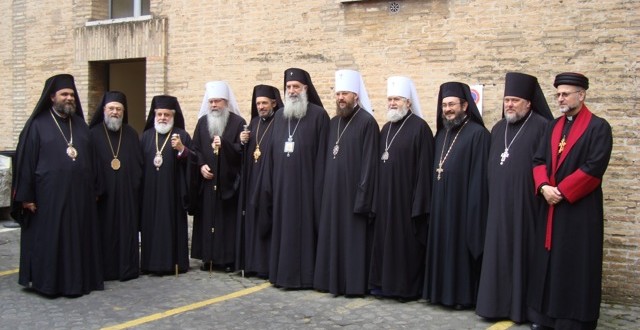 His Grace Mar Odisho Oraham, Bishop of the Assyrian Church of the East, Diocese of Europe arrived at Rome International Airport on Monday 18 March 2013 in preparation to attend the Papal inauguration of His Holiness Pope Francis at St Peter’s Square in the Vatican representing His Holiness Mar Dinkha IV, Catholicos-Patriarch.

The Bishop of Europe was welcomed at the airport by Reverend Tyari Aweshalem, priest of the Assyrian Church of the East currently studying theology in Rome, along with a number of representatives of the Catholic Church.

On the morning of Tuesday 19 March, official delegations arrived at St Peter’s Basilica at 9.30am before the commencement of the consecration of the new Pontiff.

On Wednesday 20 March, all official delegations were welcomed at an audience with the new Pope and offered felicitations to him personally. After greeting the delegations His Holiness Pope Francis delivered an address stressing the need for unity between the churches and committing to follow in the footsteps of his predecessors in working for greater dialogue and understanding between the churches.