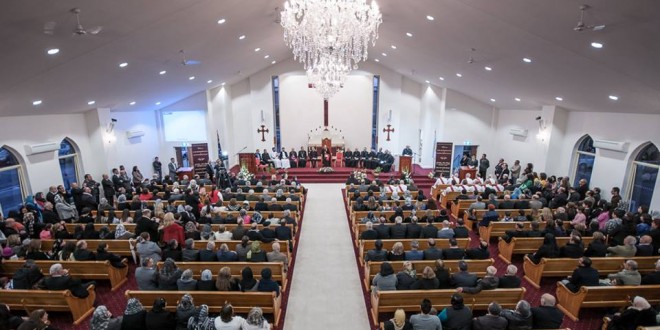 In a weekend of joy and adulation, the Assyrian Church of the East in Victoria, Australia has celebrated the grand opening and consecration of St Abdisho’s Church in the suburb of Coolaroo. Both events, on 3 and 4 May 2014 respectively, saw thousands of Assyrians and faithful of sister churches join the festivities for the long-awaited milestone in the life of Victoria’s Assyrian community.

On Saturday 3 May faithful braved wet weather for the grand opening of the church. The event, commencing at 5pm, was presided over by His Beatitude Mar Meelis Zaia AM, Metropolitan of Australia, New Zealand and Lebanon. Despite the weather conditions a procession made its way from the adjacent Ishtar Reception Centre to the church. Led by His Beatitude to the sound of church hymns and praise, the procession included the church choir, deacons, priests and guests of honour. Upon entering the new church, the Metropolitan cut a ceremonial ribbon declaring St Abdisho’s Church open in the name of the Triune God.

In opening the event programme, the Master of Ceremonies recounted the history of the Assyrian Church of the East in Victoria commencing with its origins in the late 1970s.The growth in the size of the parish was noted with the number of faithful having increased exponentially since the formation of the parish. In the late 1970s the community was comprised of only a dozen families. It today has nearly 2000 registered members, not including children (1000 families).

Following the welcome and introduction, the programme proceeded with hymns performed by the church choir, addresses from the distinguished guests and presentations from parish priests.

The keynote address of the evening was given by His Beatitude Mar Meelis Zaia AM. In his remarks the Metropolitan recounted the history of the construction project, offering his thanks to those involved in bringing the construction of the new church to fruition. It is noteworthy that construction work for the new church commenced on 8 December 2011. He continued, paying particular attention to the devout and faithful members of the church in Victoria and expressing his pride in their dedication and generosity. His Beatitude also discussed the future plans for the remainder of the site currently occupied by the two Ishtar Reception Centre buildings confirming that a Sunday school building and church hall would be constructed in the future.

The evening was concluded in the adjacent church hall where the faithful joined His Beatitude and guests of honour in light refreshments and fellowship.

In his sermon, His Beatitude spoke at length exhorting the faithful to embrace the blessed Gospel, living life in the fullness found in Jesus Christ. Discussing the history of St Abdisho and his historical life and times, the Metropolitan noted the affinity with which many Christians from Iraq and Iran hold the blessed St Abdisho given that he is the patron saint of a number of villages and regions in the ancestral Assyrian homeland. His Beatitude imparted his blessings upon the faithful of the Holy Church in Victoria, praying that their new church would be a place for solemn worship and fraternal communion.

The parish priests and church council of the Assyrian Church of the East in Victoria along with the organising committee for the opening of St Abdisho’s Church express their immense gratitude to all those who contributed to this monumental achievement in the life of Victoria’s Assyrian community. It is prayed that St Abdisho’s Church may be a house of solemn prayer, a refuge for the burdened and an edifice for the glory of Almighty God.