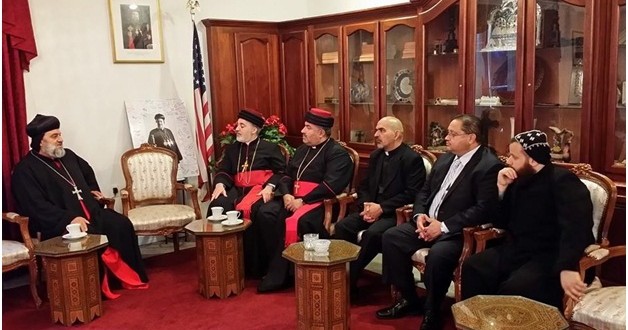 With the blessing of His Holiness Mar Dinkha IV, Catholicos-Patriarch of the Assyrian Church of the East, the bishops of the Diocese of California and the Diocese of Eastern USA paid a cordial visit to Patriarch-Elect of the Syriac Orthodox Church, His Holiness Mor Ignatius Ephrem II Karim. The cordial encounter took place on Thursday, May 15, 2014 at St. Mark’s Syriac Orthodox Cathedral in Teaneck, New Jersey. The Patriarch-Elect was attended by Rev. Dayraya Augeen Alkass, the Rev. Malfono Dr. George Kiraz, President and Founder of Beth Mardutho. His Grace Mar Awa Royel, Bishop of California and Secretary of the Holy Synod, and His Grace Mar Paulus Benyamin the Bishop of Chicago and Eastern USA were accompanied by Rev. Addai Francis, priest of Mar Mari Parish of the Assyrian Church of the East in Yonkers, New York, and Mr. Zia Givargizade. The same Mar Mari parish committee (motwa) had kindly hosted the bishops for the whole duration of their stay.

During the visit of the Bishops of the Assyrian Church to the Patriarch-Elect, the official letter of felicitation and greeting by His Holiness Mar Dinkha IV was handed to the new patriarch. In this letter, His Holiness also expressed his keen desire to open a formal dialogue with the Syriac Orthodox brethren, and to work on bringing our two communities closer together. The Patriarch-Elect rejoiced at the warm spirit of the letter of the Assyrian patriarch, and expressed his desire to work ardently for the rapprochement of these two ancient Churches—the Assyrian Church of the East and the Syriac Orthodox Church. He reiterated that he would do all that is possible to bring down the walls of division between us and to do away with the obstacles that still divide us. During the course of the audience, the matter of the plight of the Christian communities in the Middle East, particularly in Syria and Iraq, were discussed. Also, a detailed exchange of information on the various steps taken by the Christian communities in the diaspora to remedy the situation and to seek practical solutions to the mass migrations and forced displacement of the indigenous peoples of these countries was engaged in.

At the end of the audience, the Patriarch-Elect asked the bishops to extend his greetings and sincere best wishes to His Holiness Mar Dinkha IV, and he gave the bishops a book of Syriac Orthodox Church history as a momento of the occasion. Afterwards, a warm luncheon was offered by the Patriarch-Elect to the bishops and other clergy and lay well-wishers who had come to greet the Patriarch. The Assyrian bishops were then given a tour of the new diocesan headquarters of the Syriac Orthodox Church in Paramus which is presently under renovation and construction.

The following day, Friday, May 16, 2014, a warm invitation was extended by Malfono George Kiraz to the Assyrian bishops to attend the Hugoye Symposium III, which was presented by the joint collaboration of the Beth Mardutho Research Library and the Rutgers University Libraries, in New Brunswick, New Jersey. The one-day symposium, titled ‘Colophons in the Syriac Tradition,’ was held at the Alexander Library. Scholars from across the US and Europe were in attendance, among which were: Sebastian P. Brock, Kathleen McVey, George Kiraz, Alexei Muraviev, as well as others. Other speakers included Nicholas Al-Jeloo, Adam McCollum, and Assyrian attendees from Pittsburgh. 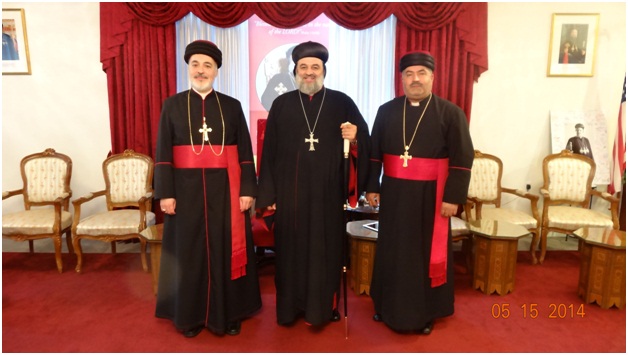 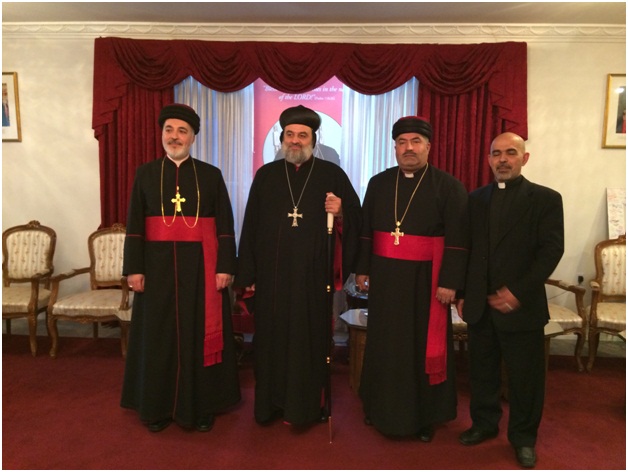 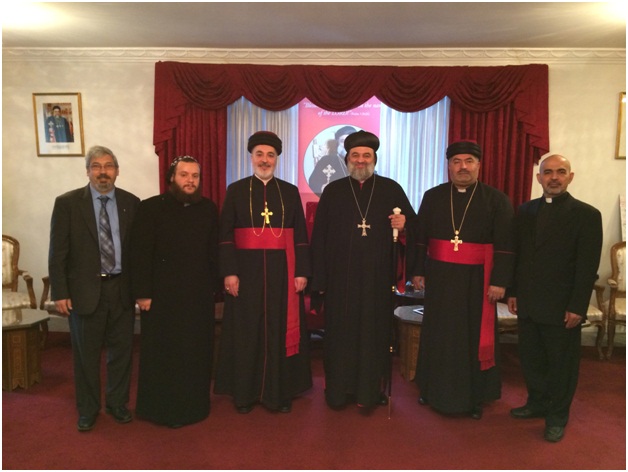 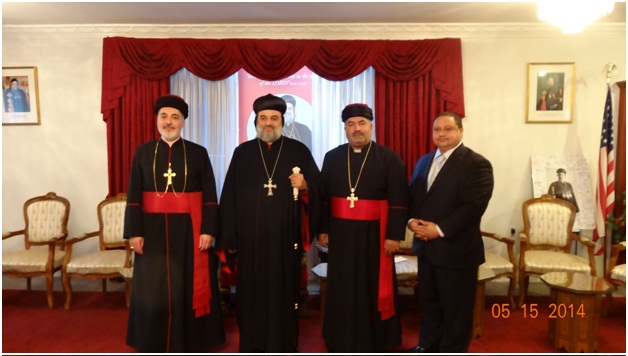 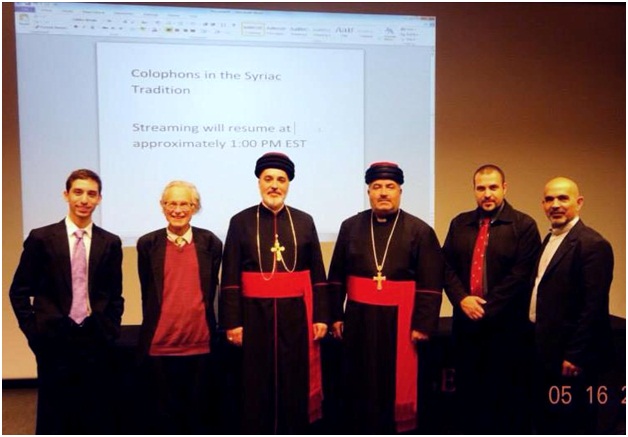 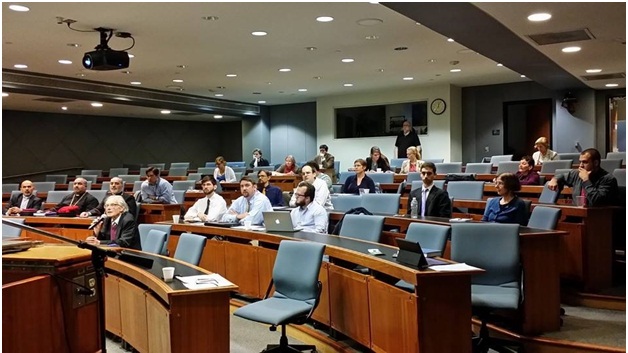 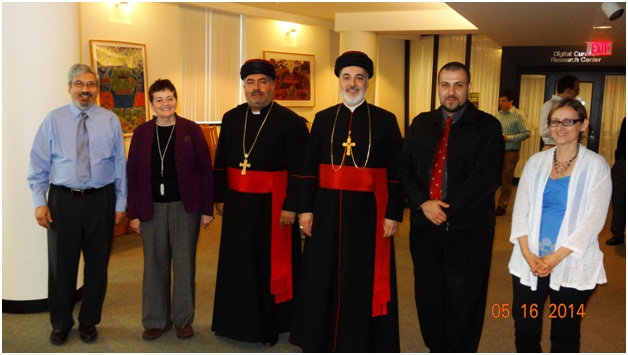 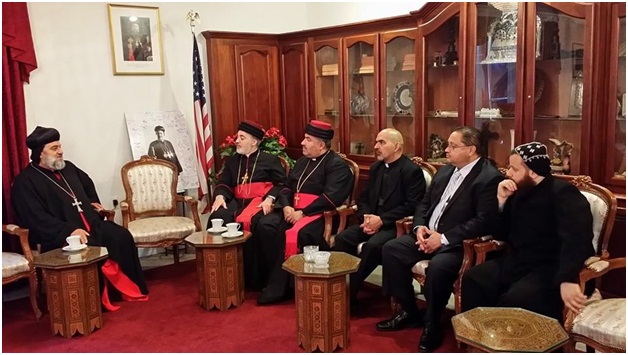 Previous Grand Opening and Consecration of St Abdisho’s Church in Victoria, Australia
Next Voice of the East – Vol. 61 – May & June 2014