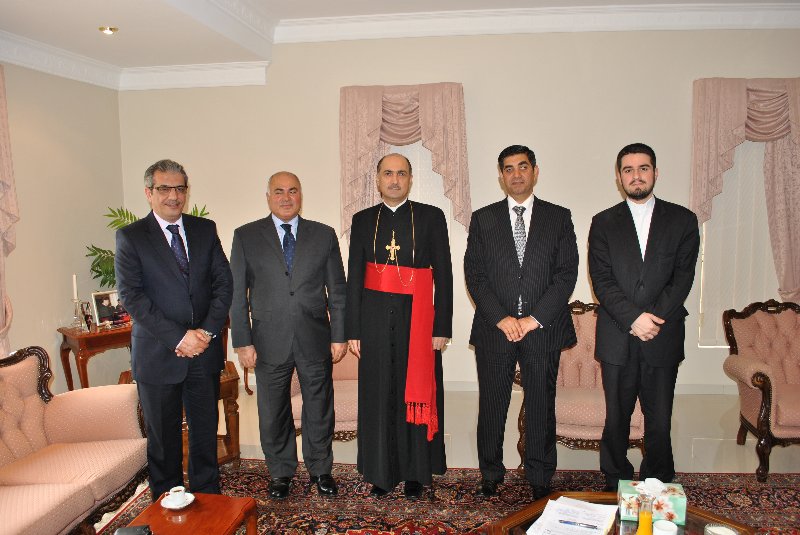 Protection for Christians and non-Christians living in the Middle East has been discussed during a meeting between His Beatitude Mar Meelis Zaia AM, Metropolitan of Australia, New Zealand and Lebanon, and His Excellency Mouayed Saleh, the Iraqi Ambassador to Australia.

The meeting, which was also attended by consulate officials Muhsin Al-Samaraee and Yarub Al-Anbaqi, and Chaplain for The Assyrian Schools and Youth Association of Sydney, Rev. Narsai Youkhanis, commenced with the discussion of the changes that have taken place in the Middle East. Concerns were raised over the consequent impact to Iraqi refugees, and the issues facing their future and survival in the homeland.

His Beatitude urged the Iraqi Government to preserve and protect the diversity and beliefs of others, both Christians and non-Christians, in light of recent assaults and intimidations faced by community members in the village of Zakho, Northern Iraq.

The delegates mentioned the issue of citizenship for those who have already fled the homeland. Refugees, on settling, must abide to the rules of the new land which they call home.

Also discussed during the meeting was the topic of the Nineveh plains, located in Mosul, Iraq and which many nationalistic parties and associations are fighting to secure as a protected Assyrian state. The region, noted His Beatitude, is not a religious area, but rather a community comprising of schools, universities, churches and even mosques for the larger community.

The issue of the Nineveh plains should also be reviewed by the patriarchs of the churches, agreed the delegates, in order for the popular demands of the community to be made known to the heads of churches.

His Beatitude also mentioned the significant historical, scientific and cultural link between Christians and Muslims in the Middle East.

The Ambassador agreed, highlighting the importance of Iraqi Christians as the forefathers of Iraqi civilisation. He also acknowledged persecution that Christians in the Middle East have faced.

Western influence, His Excellency said, had helped to develop a stronger sense of nationalism in Iraq, a great example being the presence of democratic elections.

In concluding the meeting, His Beatitude and His Excellency expressed their joy in meeting together and establishing dialogue between the two parties.

Each praised the role and work done by both the church and the nationalistic parties towards the goal of a better Iraq. His Excellency extended an invitation for His Beatitude to visit the Embassy of the Republic of Iraq in Canberra.