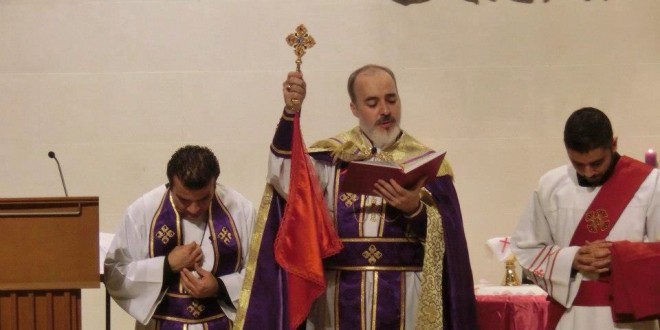 On 11 September 2014, His Grace Mar Awa Royel, Bishop of California and Secretary of the Holy Synod addressed the ‘In Defence of Christians’ summit held in Washington D.C. between 9-11 September 2014.

According to ‘In Defence of Christians’, “The primary purpose of the Summit is to bring all members of the Diaspora together in a newfound sense of unity. Whether Orthodox or Catholic; Evangelical, Coptic or Maronite; Syriac, Lebanese, Chaldean or Assyrian – all Middle Eastern Christians will be called on to join together in solidarity.

“This solidarity will strengthen advocacy efforts with policy makers and elected officials and make more palatable grassroots outreach to the American public. Thus united, Middle Eastern Christians will invite all people of good will to join the cause to defend the defenseless, to be a voice for those who are voiceless.

“The survival of these historic Christian communities is not merely a moral imperative; it is in the interests of all nations and peoples of the West and the Middle East.”

This is the text of His Grace’s speech:

Your Holinesses,
Your Beatitudes,
Your Excellencies and Graces,
Reverend Fathers,
Dear Friends,
Ladies and Gentlemen:

It is a great honor and privilege to be here with you this afternoon, representing His Holiness Mar Dinkha IV, Catholicos-Patriarch of the Assyrian Church of the East (along with my brother His Grace Bishop Mar Paulus Benjamin), who could not attend due to health reasons. His Holiness sends his greetings, prayers and love to each and every one of you, with a particular gratitude to Toufic Baaklini and the organizers of the IDC.

This afternoon’s panel discussion is a most pertinent one, I believe, because it gives a sense of direction and purpose to our discussions and deliberations in which we have engaged during the course of this summit. It is a topic that affects the daily lives of our Churches and peoples, both in the Middle East and in the Diaspora, namely: What indispensable role does Christianity have to play in the Middle East?

Notwithstanding the fact that many of our Churches have migrated to the West, and as a cause we have seen the dwindling of the numbers of our faithful in the Middle East, the roots of Christianity and it important role in society cannot be undone. I would like to echo the words of His Holiness Pope Francis stated in Jordan during his visit to the Holy Land this past May: “We will not be resigned to think about the Middle East without Christians!”

I propose to look at the important and vital role of Christianity in the Middle East in its three important moments or junctures, namely: past, present and future.

First, historically Christianity has played a role in the Middle East, indeed from the inception of our faith and beginnings of the Early Church, which has marked an important change in the life of humanity as a whole. The very mystery of the Incarnation itself, unique to the Christian faith, marked a turning point for all of humanity, indeed on a cosmic level: God stepped into history in order to show His solidarity with man–God became man, that man might become God. Therefore, by its very nature Christianity has the vital role of being a salutary faith (i.e. offering salvation to humanity) and demonstrating the proximity of our Creator to his most cherished of creations–man. In the Incarnation, the Son of God (the Word become flesh), announced to us the Gospel of salvation and eternal life in his name.

Christianity, therefore, is not just another religion in the Middle East (even the classical nomenclature of comparative religion as being one of the three ‘monotheistic’ religions does not suffice!), but it offers salvation to the world and to the peoples of the Middle East. As Christians, we can never lose sight of the importance of the missionary aspect of the Church. By its very nature, the Church must evangelize and bring the Gospel to all peoples–even to those who are enemies of the Gospel. This is evident in the great commissioning of the Twelve by our Lord (cf. Matthew 28:18-19).

As the Church grew and became present in the whole East, it brought civilization and learning to all the peoples of the Middle East. The history of the court physicians of the Abbasid caliphate, for example, is all too well-known in the annals of history. The fact that Greek learning and philosophy passed into the Latin language and to the Arabs via the Syriac translators and fathers is living proof of the pivotal role of the Christian East in the society and social context of their day for countless generations.

The second important moment of Christianity’s vitality for the Middle East is the present. And, indeed, this is a pertinent moment for all of us gathered here today under the aegis of the IDC, and it is a matter of concern for all of the Churches that continue to struggle for survival in the Middle East. It cannot be denied that the role of the Christians of the East in helping to build up the new Arab nation-states that were constructed after the First World War and as result of the dismantling of the Ottoman Empire was a most decisive one. Christians excelled in areas of science, mathematics, culture, education, medicine and literature, not to exclude their influence and important role in the political life of the countries of the Middle East which they have known as their homes. The many private schools owned and operated by the Christians since the formation of the modern Arab states are a living testimony to these contributions on the part of the Christians. Respecting the culture and religious sensitivities of the Muslim Arabs all the while, Christian educators tutored and imparted learning and culture to the most elite of the Arab fabric of society. Further, till this very day Christian caretakers and those in the medical field have cared for children, women and the elderly of Muslim Arab society without distinction and in a most superb and caring manner. We can only imagine what a vast void would be left in modern-day Muslim Arab society were there no Christian schools, hospitals, child and elderly care facilities operating (and successfully!) in the Middle East today.

What this means is that Christians are an indispensable part of the fabric of Muslim/Arab society in the Middle East today; they have always been, since the rise of Islam in the early 7th century!

The third and final moment of the vitality of Christianity in the Middle East is the future. What will the face of Christianity look like 5, 10 and 20 years from now in front of an Islam that is growing ever more intolerant and fundamentalist? The history of the Church in the East teaches us many lessons, and we can see well-established patterns and tendencies that, more or less, repeat themselves any given number of years. However, can the world stand by and continue to allow that to happen? What will become of a Christianity which is ever so persecuted, but continues to contribute to the good of the society in which it lives, even though that society is unwelcoming and antagonistic? How will our Churches survive in the East in the coming years? What can we do to insure that survival, or at least (if utterly nothing else) slow it down considerably?

I’m of the opinion that this ‘third moment’ of Christianity’s vitality to the Middle East will be determined by one possible factor among many, and that is the unity of the Christian Churches in the East!

It is no understatement that our present Cross and burden being borne by all of our Churches in the Middle East has indeed brought us together. The present summit, the IDC and many other organizations across the globe demonstrate the willingness of the Christian Churches in the East to come together, to ‘unite’ as it were, in order to understand our common plight and search out common solutions and answers to our plight. There is a certain level of unity that is demonstrated, and on the first day of the summit many of the eminent speakers expounded upon the topic of the ‘Call to Unity.’ Patriarch Aram I reminded all of us that unity is an essential part of the Church’s very nature and fabric. And that is exactly the point that I would like to propose as the ‘third moment’ of Christianity in the Middle East–i.e. the future of our Churches in the lands we know and call our own, yet which in a very real way are not welcoming and are not our own.

The ecumenical movement in the life of our Churches as a real response to addressing the concerns and fears of survival of Christianity in the Middle East for the future cannot be overstated. Although we are united in a very real sense here today, but yet we acknowledge that we are not yet really united. The scandal of the division of the Body of Christ (his Church) is a wound that we all suffer from in our daily lives and in the lives of our Churches and faithful. Crystalized dogmatic expressions and anathemas continue to be a part of our ecclesial, canonical and liturgical identity in a very real and definitive sense. And the greatest scandal is that we cannot as of yet fully and really participate at the Lord’s altar together, in order to partake of the one Bread of Life and the one Chalice of salvation.
As we move forward in the lives of our Churches in the face of neighbors who have not acted so neighborly towards us, let us remember our own sins, and make the firm resolve to proclaim one Gospel together, one Christ and one faith. We have been united these days together as brothers in sisters in Christ on account of the evil perpetrated against our brothers and sisters in the Middle East, let us take this momentum and move together, and be united really and visibly into the One, Holy, Catholic and Apostolic Church built by Christ himself, so that the gates of hades might never prevail against her.