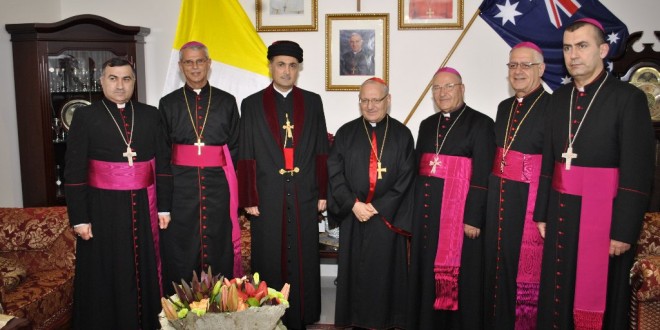 At the commencement of the meeting His Beatitude extended the greetings of His Holiness Mar Dinkha IV, Catholicos-Patriarch to the Chaldean Catholic Patriarch and noted the Catholicos-Patriarch’s desire to strengthen the relationship between the two sister churches and to foster unity in Church of the East.

During the meeting the two parties discussed the ancient connection between the two churches which share a common faith, language, liturgy and ecclesial tradition.

Both parties stressed the need to confront the challenges facing Christians and their presence in the Middle East with one voice, and to pursue points of convergence as mandated by the Lord. Both the Metropolitan and Patriarch expressed their desire to bypass obstacles in pursuit of the achievement of the hopes and desires of the faithful of both churches, particularly in Iraq where a common determination for unity is shared.

His Beatitude the Metropolitan also briefed His Beatitude the Patriarch on the work of the Assyrian Church of the East’s Commission on Inter-Church Relations and Educational Development in its long-standing and official dialogue with the Vatican.

On Saturday 4 May 2013, His Beatitude had attended the consecration of the newly-constructed Church of the Assumption of St Mary for Chaldean and Assyrian Catholics in Fairfield, New South Wales, along with a wide number of ecumenical guests. The Metropolitan was accompanied by Rev’d Cor-bishop Ashoor Lazar at this auspicious occasion.

Previous Children’s Association Established in Sydney
Next Voice of the East – Vol. 60 – May & June 2013