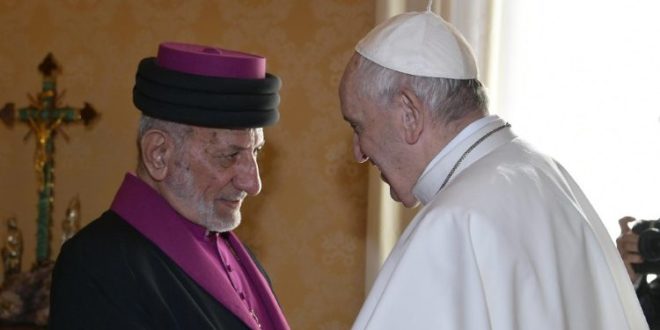 Pope Francis spoke about the “great suffering” that many Christians are enduring in the Middle East, and prayed for peace in the region, especially in Iraq and Syria.

The Pope was meeting Friday with Mar Gewargis III, the Catholicos Patriarch of the Assyrian Church of the East.

He said many Middle Eastern Christians are following in the footsteps of Christ, as they are forced to leave their homelands to escape violence.

Pope Francis noted that the Christians fleeing persecution belong to different communities. “They are forging fraternal relationships among one another,” he said, “and thus becoming, for us, witnesses of unity.”

He joyfully recalled Mar Gewargis’ presence at the Day of Reflection and Prayer for Peace in the Middle East, held on 7 July in the Italian city of Bari.

Pope Francis then turned to relations between the Catholic Church and the Assyrian Church of the East. He said the two Churches share a “particular reason for thanksgiving to God”, which is the Joint Committee for Theological Dialogue.

The two Churches signed a Common Statement on “Sacramental Life” on 24 November 2017, which set out a shared vision of sacramental theology.

Pope Francis said the Committee “shows that practical and disciplinary differences are not always an obstacle to unity, and that certain differences in theological expression can be considered complementary rather than conflicting.”

The Committee is beginning its work on the third phase of dialogue concerning ecclesiology. The Pope prayed the next stage of study “will help us to take one more step on our journey towards the much-desired goal of being able to celebrate the Sacrifice of the Lord at the same altar.”

The Holy Father recalled the 700th anniversary of the death of Abdisho bar Berika, Metropolitan of Nisibis, whom both the Assyrian Church of the East and the Chaldean Catholic Church celebrate as a pillar of the Syro-Oriental tradition.

“May the study of this great theologian help to make better known the richness of the Syriac tradition and to receive it as a gift for the entire Church,” the Pope concluded.

Following the audience, Pope Francis and Mar Gewargis III, along with his entourage, prayed together in the Redemptoris Mater Chapel for peace in the Middle East and for an end to the suffering of Christians, especially in Iraq and Syria.

Previous Voice of the East – Vol. 65 – September & October 2018
Next Sydney’s Children on their Second Annual VBS