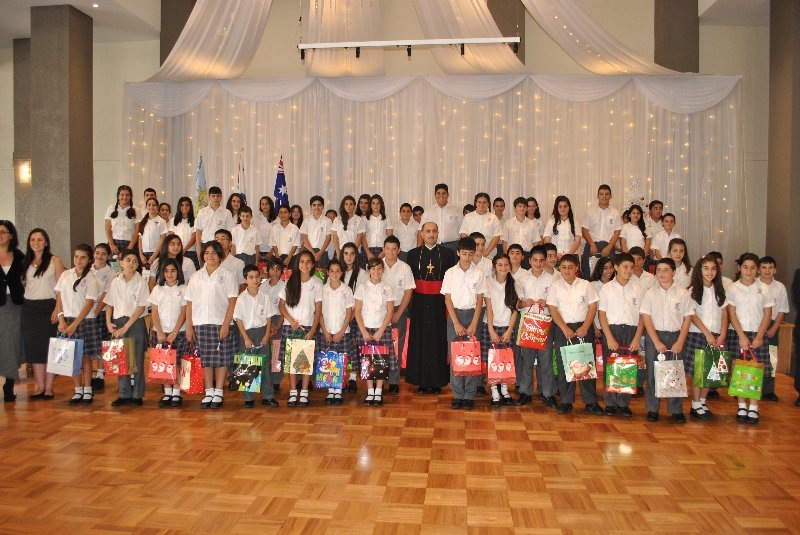 Graduation ceremonies have been held in recognition of Mar Narsai Assyrian College (MNAC) and St. Hurmizd Assyrian Primary School (SHAPS) students who will be continuing to the next level of their education in 2012.

The graduations, held on 13 December, were honoured with the presence of His Beatitude Mar Meelis Zaia AM, Metropolitan of Australia, New Zealand and Lebanon, along with Reverend Moshe Barkho and Reverend Younan Dawood, St. George Parish Priest.

In the first speech, Sargis Makko, SHAPS principal, mentioned the highlights of 2011, including His Holiness Mar Dinkha IV’s visit to the school. Mr Makko touched on upcoming projects, the expansion of the school, and made special mention of the 6th grade graduating students who will be moving on to their high schooling years at Mar Narsai Assyrian College.

Following Mr Makko’s speech, the school choir performed Christmas hymns, and retold the story of the birth of our Lord and Saviour Jesus Christ in the nativity story.

Students who excelled in their studies were awarded NAPLAN certificate, religious and community service certificates and sporting excellence certificates. Following, a presentation was given to farewell Year 6 students and new school captains were chosen for 2012.

In his keynote address, His Beatitude spoke on the current academic year and the educational plans that are to be implemented to further serve the Sydney community in the near future.

During MNAC’s graduation ceremony later that evening, school principal John Haskal gave a review of the 2011 school year and mentioned the outstanding HSC results from this year’s graduation class.

Academic excellence certificates were awarded to students in Years 7 to 11, and awards were distributed by Member of Parliament for Smithfield, Andrew Rohan.

Religious and social certificates were also issued along with the MNAC medallion for the outstanding student. Following this, a presentation was organised for the year 10 students who completed their year 10 school certificate.

His Beatitude urged students to put their efforts and perseverance towards achieving the best for their future. He thanked the staff and teachers for their efforts throughout the academic year and announced that the school will move to its new premises in early 2013.

At the conclusion of the ceremony, MNAC’s school captains presented a gift to His Beatitude to show their thanks for his support in overcoming all obstacles that the school has gone through this year.

The Assyrian Schools in Sydney now educate more than 1000 students across MNAC, SHAPS, the Early Learning Centre for Children and Grace Childcare Centre.