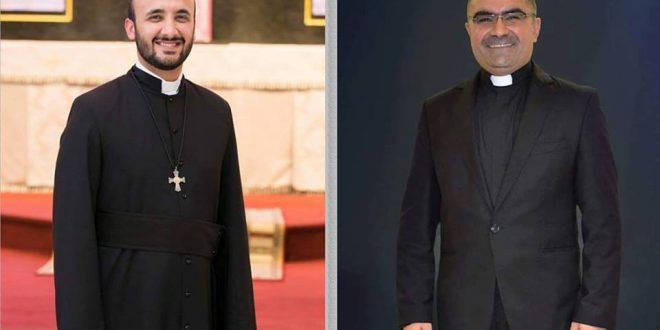 The Holy Synod of the Holy Apostolic Catholic Assyrian Church of the East, headed by His Holiness Mar Gewargis Sliwa III convened in the city of Erbil, Iraq commencing on Monday the 7th November till Saturday 12th November 2016. The Synod opened the meeting with the offering of the Holy Oblation in St Youkhana Mamdnana Cathedral (St John the Baptist) in Ankawa, Erbil.

The Holy Synod elected two priests to be consecrated bishops in the year of 2017, namely;

Reverend Tyari was born in Erbil, Iraq in the year of 1978. He was ordained a deacon by Metropolitan His Beatitude Mar Gewaris (currently His Holiness) in Baghdad on the 23rd November 2002. He was ordained a priest once again by the Metropolitan at the time in Kirkuk’s St George’s Church on the 14th January 2007. Rev’d Tyari received his Bachelor Degree in Political Science from the University of Baghdad in 2007. Rev’d Tyari also received his Masters Degree in Theology 2011 from Alphonsian Academy in Rome, Italy. And finally, received his PhD from the same institute in 2016. He was appointed as the parish priest of Erbil’s cathedral on the 3rd May 2016.

Reverend Ninos was born in Baghdad, Iraq in the year 1985. He was ordained a deacon in 2002 by Metropolitan His Beatitude Mar Meelis Zaia AM in Sydney’s St Hurmizd’s Cathedral. He was ordained a priest in 2012 once again by His Beatitude Mar Meelis. Rev’d Ninos received his Bachelor Degree from the Australian Catholic University in 2013. He also received his Masters Degree from the same institute in 2015. Currently Rev’d Ninos is the chaplain of the Assyrian Schools (St Hurmizd Primary and St Narsai High Schools), concentrating on the Christian Studies of the schools. Also, he is currently the parish priest of Saints Peter and Paul Church in Sydney.