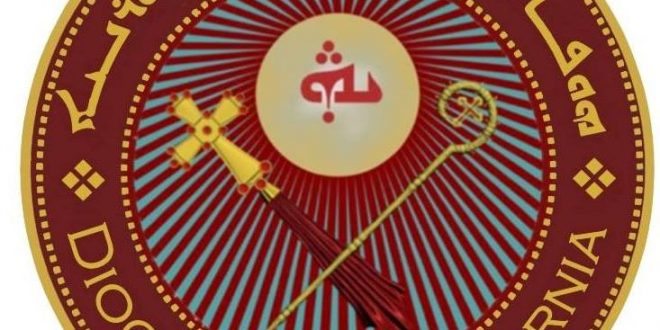 FOR THE IMMEDIATE ATTENTION OF ALL OF THE FAITHFUL OF THE ASSYRIAN CHURCH OF THE EAST, DIOCESE OF CALIFORNIA: 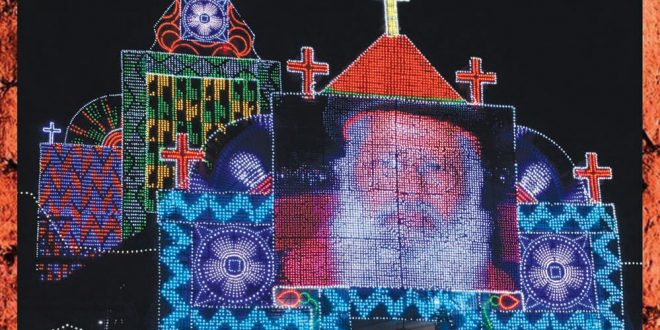 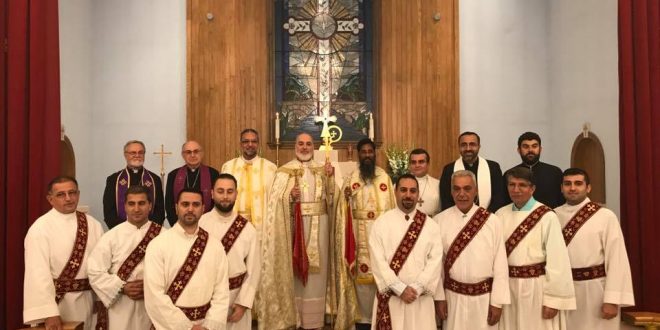 Presbyteral Ordination in the Diocese of California

November 2, 2017 Comments Off on Presbyteral Ordination in the Diocese of California

On September 13, 2017, The Feast of the Holy Cross, His Grace Mar Awa Royel, Bishop of California elevated Rev. Deacon John Piro to the ecclesiastical rank of presbyter at Mar Zaia Cathedral in Modesto, California.  Rev. Fr. John will serve as an assistant priest at Mar Addai Parish in Turlock, California.  Following the ordination, His Grace Mar Youhannan Yousip, Auxiliary Bishop of India, celebrated the Holy Mysteries and there was a fellowship meal in the Church Hall. Video of Rev. Fr. John’s Ordination Biography of Rev. Qashisha John Badal Piro Reverend Qashisha John Badal Piro was born on February 7, 1973 in the city of Turlock, CA. to his father Reverend Cor-Bishop Badal S. Piro, and Bereshwa Piro.  He is the youngest of 7 children.  He began his ecclesiastical education in the Assyrian Church of the East in both Syriac language and liturgical service at the hands of his father beginning at the age of five years.  This was instrumental in building a strong foundation in the Apostolic faith of the Church of the East, which is evident to this day. At the age of 12 years, he was ordained a hypodyakhna (subdeacon) for Mar Addai Parish and served … 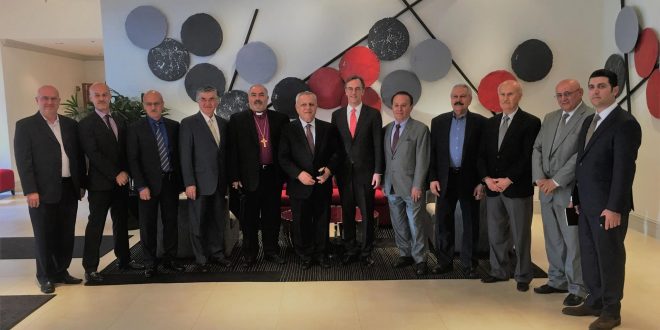 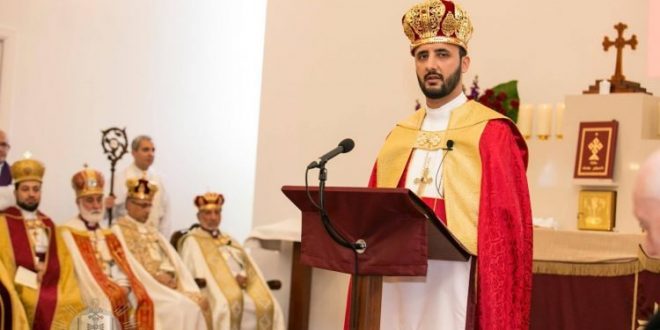 July 21, 2017 Comments Off on Catholicos-Patriarch Consecrates Mar Benyamin Elya as Bishop of Victoria and New Zealand in Melbourne 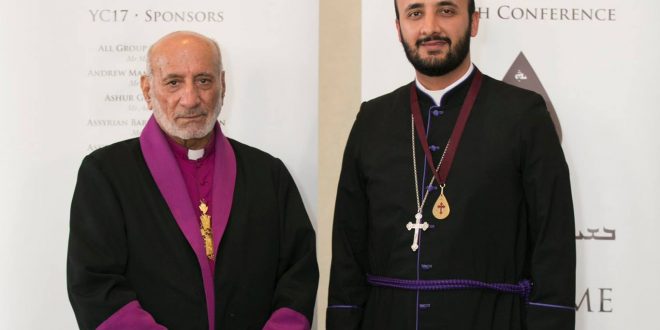 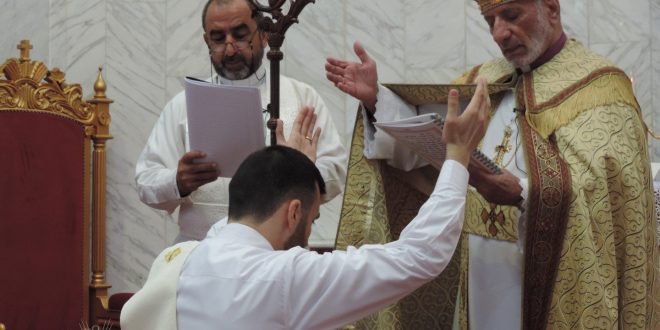 June 28, 2017 Comments Off on New Priest Ordained in Erbil, Iraq

On Friday 23rd June 2017 at St John the Baptist Church in Ankawa, Erbil, Deacon Martin Nabil Nikola was ordained to the rank of priesthood at the blessed hands of His Holiness Mar Gewargis III Sliwa, Catholicos-Patriarch of the Assyrian Church of the East. In attendance was His Grace Mar Abris Youkhanan, Bishop of Erbil and Patriarchal Vicar, Archbishop Mar Grigorios Sliwa Shimon of the Syrian Orthodox Church along with numerous reverend priests, deacons and nuns from many sister churches. Biography: Reverend Martin was born in Baghdad in 1990 and completed his primary and secondary education in the city of his birth. From there he moved to Erbil to study philosophy and theology at Babel College, successfully graduating in 2014. He was ordained a deacon by His Holiness Mar Gewargis III in St Odisho Church, Baghdad on 18th December 2010. Revered Martin is married and will serve the Assyrian Church of the East at St John the Baptist Patriarchal Cathedral in Ankawa, Erbil. 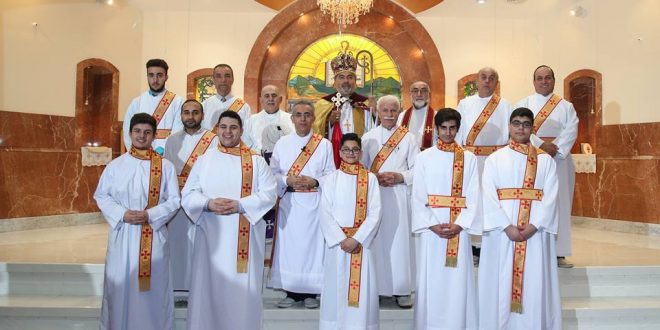 Deacon and Sub-Deacon Ordinations in Illinois

April 20, 2017 Comments Off on Deacon and Sub-Deacon Ordinations in Illinois

“…Therefore, brothers, pick out from among you seven men of good repute, full of the Spirit and of wisdom, whom we will appoint to this duty...” -Acts of the Apostles 6:3 It is with great joy that His Grace Mar Paulus Benjamin, Bishop of the Eastern United States, accepted the request of Very Rev. Fr. Cor-Bishop Dr. Gewargis Toma, parish priest of Saint Andrews Church in Glenview, Illinois to ordain one deacon and two sub-deacons for the growing parish! On the sixth week of the Great Fast, His Grace Mar Paulus Benjamin placed his blessed right hand upon two new Sub-Deacons; namely, Sargis Giliana and Tawer Matloub.  The newly ordained Sub-Deacons are great examples for the youth as they were both born and raised in the diaspora, but have spent countless hours studying the Aramaic language and the Apostolic traditions of our Holy Church. Lord willing, on April 23, 2017, during the celebration of the Divine Liturgy, His Grace Mar Paulus Benjamin will also elevate Afram Liwi Zakaria and raise him to the Holy Order of Diaconate for Saint Andrews Church.  We request the prayers of all the Church faithful, across the world, for the ones who have been called to … 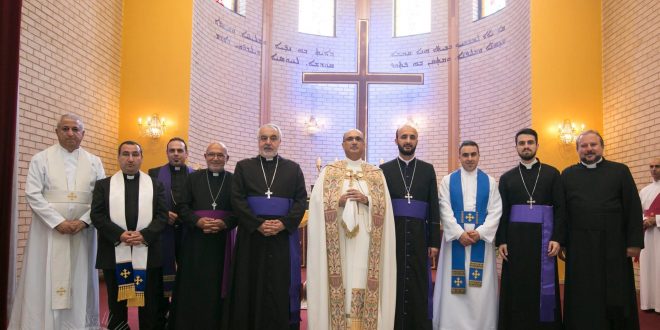 April 8, 2017 Comments Off on Five Clerical Ordinations in Australia

His Beatitude Mar Meelis Zaia AM, Metropolitan of Australia, New Zealand and Lebanon has elevated three priests to higher holy orders and ordained two priests for the Archdiocese. On Sunday 26th March His Beatitude elevated Rev’d Fr Korkis Toma to the ranking of Cor-bishop at St Abdisho’s Church in Melbourne. Rev’d Fr Korkis is the priest of the latter parish. On Sunday 2nd April His Beatitude elevated Rev’d Father Ninos Elya and Rev’d Father Narsai Youkhanis to the ranking of Archdeacon and Cor-bishop, respectively at St Hurmizd’s Cathedral. The Rev’d Archdeacon Ninos Elya, formerly  parish priest of Saints Peter and Paul Church and chaplain of the Assyrian Schools is to be consecrated to the episcopate on 16th July in Melbourne for the newly formed Diocese of Victoria and New Zealand. Rev’d Cor-bishop Narsai Youkhanis is the secretary to the Metropolitan and chaplain for the youth and children’s associations and will now take up responsibility for international youth ministry for the Assyrian Church of the East. On the same day, Deacon Sami Reverend Shamuel was ordained to the ranking of priesthood and will assume the name Rev’d Father Shamuel Shamuel and a role as chaplain at St Narsai Assyrian Christian College and the responsible clergy member for the Christian education in the Archdiocese. Also, Deacon Neil Makko was ordained to the ranking of priesthood and will take on the role of parish priest at Saints Peter and Paul … 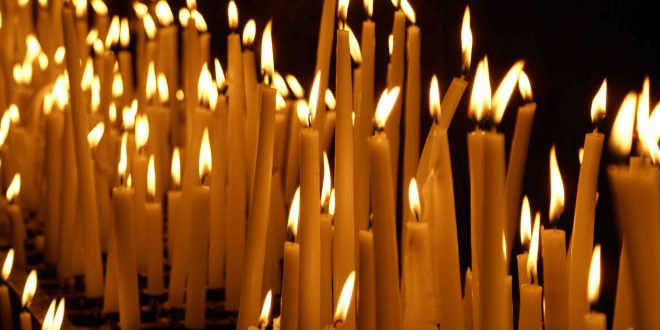 FASTING AND GREAT LENT The institution of fasting: Fasting is as old as the human race is. From the Old Testament we learn that God instituted fasting in Paradise. It is written: “The LORD God took the man and put him in the Garden of Eden to work it and take care of it. And the LORD God commanded the man, “You are free to eat from any tree in the garden; but you must not eat from the tree of the knowledge of good and evil, for when you eat from it you will certainly die.” (Gen. 2:15-17) The above mentioned verse makes it clear that fasting existed before the Adam and Eve committed sin by breaking the commandment of God, and fasting was not established as a treatment for their sin. The fasting in Paradise consisted of abstaining of the fruit of the tree, the tree of knowledge of good and evil. God by commanding Adam and Eve not to eat of the particular fruit wanted to teach them the discipline of self-control and spiritual growth. Fasting was practiced both in the Old and New Testament and throughout the history of the Church. What is the similarity between … 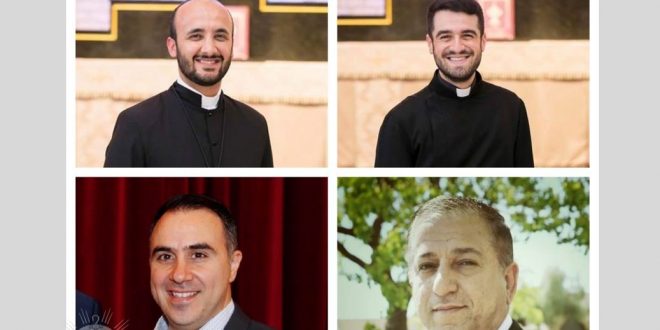 February 27, 2017 Comments Off on Announcement of Sydney Clerical Ordinations

On Sunday 26th February being the beginning of the Great Lent in the church’s liturgical calendar, His Eminence Mar Meelis Zaia AM offered the Holy Eucharistic service at St Hurmizd’s Cathedral, Greenfield Park. By which the announcement of Sydney’s clerical ordinations was made to the congregation, to take place 8:00 am on Sunday 2nd April at St Hurmizd’s Cathedral, and are as follows: Reverend Father Ninos Elya to be elevated to the ranking of Archdeacon for the Holy Church, in preparations for his consecration as bishop on Sunday the 16th July in St Abdisho’s Church, Melbourne as elected by the Holy Synod. The Church will be anticipating the attendance of His Holiness Mar Gewargis Sliwa Catholicos Patriarch accompanied by a number of esteemed prelates. Reverend Father Narsai Youkhanis to be elevated to the ranking of Chor-Bishop for the Holy Church, in commencing his international youth ministry as elected by the Holy Synod. Deacon Neil Makko to be elevated to the ranking of priesthood and taking on the responsibilities of Saints Peter and Paul Church in Cecil Park, Sydney. Deacon Neil will relieve Rev’d Fr Ninos as he commences his bishop duties for Melbourne in July 2017. At the same time, … 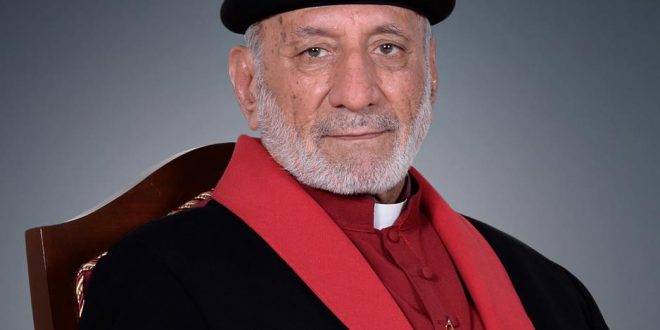 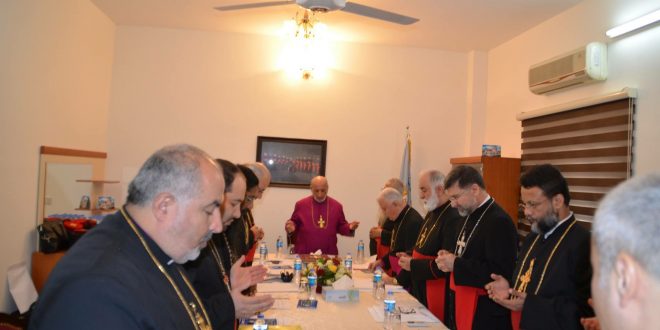 December 17, 2016 Comments Off on FINAL COMMUNIQUE OF THE SECOND HOLY SYNOD DURING THE PATRIARCHATE OF HIS HOLINESS MAR GEWARGIS III SLIWA 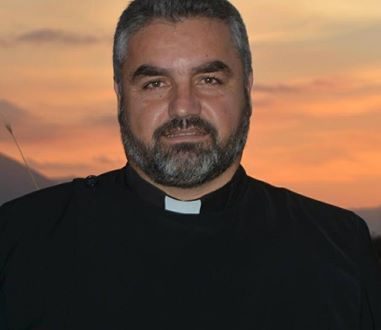 November 18, 2016 Comments Off on Northern Iraq’s Village of Sarsing Mourns the Death of Rev’d Patros Younan

“For if we believe that Jesus died and rose again, even so them also which sleep in Jesus will God bring with him.” (1 Thessalonians 4:14) On Wednesday 16th November 2016, the village of Sarsing in Northern Iraq mourned the death of Reverend Father Patros Younan, parish priest of St Matthew’s Church. The Late Rev’d Fr Patros Younan was born in the year of 1969, was married with four children; two boys and tow girls. He was ordained a priest on the 18th February 2012 by His Grace Mar Iskhaq Yousip, bishop of the diocese of Northern Iraq and Russia. He served at St Matthew’s Church in the village of Sarsing and other surrounding churches. The funeral service will be held 1:00 pm on Friday 18th November 2016 in St Matthew’s Church. The Church in its entirety convey their condolences to his family and parishioners, and pray that the Lord grants him His Eternal Kingdom as a faithful servant.